Edouard Louis: ‘There were no books in my house. We hated them’

The 24-year-old French author didn't read until he was 17. But his incendiary portrait of his upbringing, among a routinely racist, sexist and homophobic French cohort of heavy drinkers, has become a publishing sensation 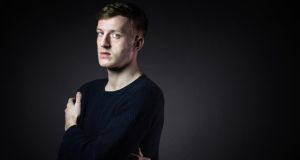 Edouard Louis is a prodigious talent in European literary circles. A 24-year-old bestselling author of two novels, he is freely compared to the likes of Karl Ove Knausgard and Elena Ferrante. His autobiographical debut, The End of Eddy, tells the often harrowing tale of his upbringing within a small village in northern France. Published when he was 21, the world of The End of Eddy is one beset by poverty, violence and addiction, in which Louis depicts the trials of battling all these forces while coming to term with his own sexuality in an oppressively masculine and homophobic milieu.

The novel, now released in English for the first time, relates these struggles in a manner that is often unsparing to the point of horror, a tone set early on when Eddy starkly states: “From my childhood I have no happy memories.” In addressing these themes of social fracture and rampant intolerance, Louis paints a picture of France far removed from the cosmopolitan and socially progressive representation many will know from that country’s literary output. This contradiction was a core part of his motive for writing the book.

“When people say France, I just ask what do they mean by France?” he says. “Even now when we talk about French people, we always talk about the same people; the bourgeoisie or the middle class. My mother would always say ‘Nobody cares about us, nobody talks about us. We are meaningless for other people.’ When I left for Paris, I started to read books for the first time in my life, I realised the people in of my childhood, these poor people, were nowhere – they did not exist in literature or the media. It made me angry and I wanted to give them a voice.”

The people Louis describes – “the lumpen proletariat, not even the working classes in many cases” – form the dramatis personae of his novel; a routinely racist, sexist and homophobic cohort of heavy drinkers with a propensity towards violence. Throughout this tale, Eddy is routinely abused and rejected and beaten, but one of the hallmarks of the book is the startling degree to which Louis suspends judgment on those who might otherwise be termed his tormenters.

“When I talk about the violence of my father or mother, I always talk about the childhoods that they had. If society humiliates people like my father or my mother, they will seek to humiliate others so as not to be at the lowest level. All my family are voting for Front Nationale, because people feel hopeless.”

This hopelessness is common to most of the novel’s characters, near universally cast as being trapped in socially-ordained loops of low education, low expectations, and low-paid work. One of the revealing themes in the book is how little those characters seem to be aware how much is being closed off to them from above.

“I don’t know that it’s completely closed or else I wouldn’t be sitting here. If I write it’s because I have hope. But as soon as you crash in this world, society has named you: you’re just a woman, a faggot, an Arab, Irish. But you can change this predestination.”

In Louis’s case, this change in his destiny began when he left his provincial home to attend a better high school, and later the prestigious École Normale Superior in Paris. This was no small task considering that by the time he was leaving his teens he says he had little to no experience of reading, let alone of serious academics. “Honestly, I didn’t read until I was 17 years old, because my father told me ‘books are for pussies’. There were no books in my house. They were suspicious; a symbol of a life we would never have. So we hated them.”

I ask if they at least made an exception for his own book. “I don’t believe they’ve read it, because as I said, reading was not the done thing and it may even be difficult. But they’ve heard about it,” he says, laughing.

In the event, his family’s reaction was mixed to say the least. “My mother said ‘my son is a liar’ and went on one of the most popular shows in France to do so.” Amid the unflinching portrayals of violence and addiction, not to mention the frank descriptions of his own nascent sexual desire, Louis found that her real objection was more simple than that. “When I saw her,” he remembers, “all she said was, ‘Why did you say we are poor?’ That was what upset her. The system makes poor people believe that it is their fault and that they should be ashamed of it. She doesn’t call her circumstances hard, she calls them ‘life’. My parents simply didn’t recognise themselves in my story.”

The End of Eddy is now a certified publishing sensation, with awards, translations in 20 languages, and sales in the hundreds of thousands – some way north of the 2,000 to which its publisher initially committed, a stock it expected would last it some time. Many will wonder how a young man so conflicted, so full of self-doubt and writerly inexperience, could have crafted a memoir of such clarity and poise; especially considering he had never so much as read a book cover-to-cover so soon before he began penning his own. Louis is fairly clear on how this turning point came about.

“When I was 17, I read Returning to Reims by Didier Eribon, a story of a boy from the working class who goes to Paris to become an intellectual. A friend told me to read it, saying ‘you should read this book, it’s the same story as you, only he’s gay’. I was still in the closet so this was an opportunity for me to read something ‘gay’ without suspicion. I realised I wanted to do the same thing; I want to be a writer, go to Paris, study philosophy, etc. And then I started to read, read, read, read all the time. I didn’t understand anything of what I was reading, it was so hard. I was crying while reading, because I thought, my god, why am I so stupid? But I knew I had to go on. And one year after that, I started to write. After two years, it was published, when I was 21.”

Before we part ways, however, Louis also makes sure to acknowledge one further important influence on his literary journey.

“I must also say that before Eribon, I read Harry Potter. It was very important for me, because I would never have read other books if I hadn’t read that before it. It meant that I was able to read a book.”

In finding his own path out of his surroundings, Louis can look back and see a little of that magic having worked on his own life, and sees a commonality between his own tale, however unlikely the comparison may seem.

“Honestly, I think those books saved a generation of people. I think literature can be a great art of causes; a great art of framing the life of people to show where these things come from. A book like Harry Potter put dreams in my head. I wanted the letters to come to my place. Now I realise that a letter comes to me at the end of my book, and would take me away to a better place. So, obviously I was more influenced than I thought.”

Leaders’ debate: For one dramatic moment, the Taoiseach is like a rabbit in headlights
5 Welcome to the child sex capital of Europe
6

How was the Irish Border drawn in the first place?
9

‘We are the weirdoes, mister’: Why women love witches
Real news has value SUBSCRIBE