Dancing with the Stars: no Hollywood ending for Thalia Heffernan as she’s voted off 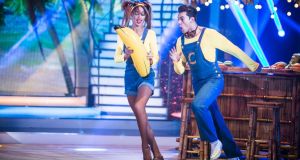 Week four of RTE’s Dancing with the Stars and our couples are celebrating iconic moments from the silver screen, like that time Indiana Jones defeated the Nazis (someone has to, right?) by dancing the paso doble or that time the hobbits rumbaed their way around Middle Earth. Sadly, the recreation of Despicable Me was not enough to keep model Thalia Heffernan and her partner Curtis Pritchard in the competition and they are the second couple to be voted off the show.

This week, our permed up Teresa Mannion whirls around the dance floor, recreating the Dolly Parton classic 9 to 5 with her partner John Nolan. While Mannion is an absolute joy to behold, judge Lorraine Barry says that she is a work in progress and she ends up at the bottom of the leaderboard. GAA star Aidan O’Mahony and his partner Valeria Milova open the show with their interpretation of Indiana Jones and Raiders of the Lost Ark. With O’Mahony’s shirt left casually unbuttoned to reveal his golden abs and get some extra votes, his poor posture and lack of charisma let him down, earning him 16 points.

Judge Brian Redmond tows a stern line this week as he says that a one-legged kangaroo would have more bounce than Katherine Lynch’s Mamma Mia-inspired samba. While nerves are quite visible in other contestants, Lynch keeps a cool head and makes it seem like she is having the time of her life. Actress Aoibhín Garrihy is in a league of her own when it comes to dancing. With her partner Vitali Kozmin, Redmond says that their rumba to Falling Slowly from Once is technically excellent and lyrically beautiful and Lorraine Barry echoes his sentiments, describing the pair as captivating.

Sending @ThaliaHeffernan home was classic tv plot to up the ratings #DWTSIrl "Oh so ya'll wanted a twist?!" #shockfactor pic.twitter.com/I72K5Fhge4

Thalia left over Dr Eva?? The Irish public can't be trusted with the #DWTSIrl vote. Maybe bring in the Dance Off? #travesty

Still fuming Thalia is gone, seriously its a joke #DWTSIrl

Shame that #DWTSIrl doesn't have a dance-off - runs risk of being popularity contest rather than dance competition - let the judges decide!

@sportsdes has changed Tv in Ireland forever on #DWTSIrl This can never be undone or unseen. @TheSundayGame will have to really up its game! pic.twitter.com/BNMmE21tpW

Des Cahill!! Omg that was the best entertainment on RTE ever. What a hero #DWTSIrl

For some reason, boyband star Dayl Cronin is quite insistent that his love of hip hop dancing should work its way into his routines, something that rubs the judges up the wrong way. This week, he and his partner Ksenia Zsihotska jive to Footloose with a rodeo backdrop and, thankfully, the rodeo has no room for hip hop. Julian Benson describes their jive as “fast, furious and full of content”, earning them 27 points and placing them at the top of the leaderboard.

In rehearsal footage, Dr Eva Orsmond and her partner Sean Smullen appear to be clashing but when they hit the dance floor as Mary Poppins and Bert, all tensions fade away. Dancing to A Spoonful of Sugar, Smullen says that it took more than sugar to sweeten up Orsmond this week (meow) but they get there in the end, even if the judges aren’t overly impressed. Meanwhile, Red Rock star Denise McCormack and her partner Ryan McShane did the unbelievable and make hobbits seem sexy. This couple are probably one of the judges’ favourite and their rumba wins them 26 points.

Wearing a crushed blue velvet suit, Des Cahill is Austin Powers for the night. Now relying heavily on comic timing rather than rhythm, Cahill and his partner Karen Byrne have found the dynamic that works for them. Whipping out a move called The Dessie Swim, they pair finish off their salsa on the floor with Byrne riding Cahill like he is a dolphin. And this, my friends, is why we pay our TV licence fee.

Working not one but two lifts into their contemporary ballroom routine, comedian Des Bishop and Giulia Dotta really pull it out of the bag this week. Doing his best James Bond impression to Sam Smith’s Writing’s on the Wall from Spectre, Bishop has caught the judges’ attention and they have him pegged as the show’s leading man.

The celebrities are getting more confident as the weeks go by, but Mannion, O’Mahony and Orsmond are in the danger zone if they can’t keep up with the gold standard set by Bishop, Garrihy and McCormack.

The power of literature in a time of plague
8