Dancing with the Stars: Hughie Maughan first to be voted off

Des Cahill was dressed like a matador, with all the elegance of a bull with four left feet 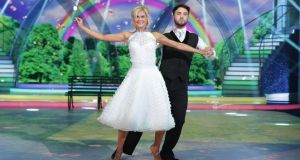 Hughie Maughan: voted off Dancing with the Stars. Photograph: RTE

Hughie Maughan is the first celebrity dancer to be eliminated by public vote from Dancing with the Stars and even though he gently waltzed his way out of his You’ve Been Tangoed disaster this week, it wasn’t enough for the voters at home.

The former Big Brother contestant and dance partner Emily Barker are the first couple to go home and while he promised extra levels of craic with the Charleston next week, we’ll have to make do with the remaining contestants who will now have to work even harder to go from chancers to dancers.

Taking on the cha-cha this week were comedian Katherine Lynch and RTÉ news correspondent Teresa Mannion. In rehearsal footage, Lynch was seen struggling to put the wiggle into her hips but dancing to Madonna’s Express Yourself, she succeeded in channelling her inner diva.

While Mannion scored a low 15 points from the judges dancing to Kelly Clarkson’s Stronger, she is still pretty much the queen of our hearts. Long may she reign.

Tonight we say goodbye to Hughie, we will miss you! #DWTSIrl pic.twitter.com/6QJI3MmAtg

The quick step is a lighthearted ballroom dance, similar to what most of us non-dancers would recognise as swing dancing. As Kerry footballer Aidan O’Mahony’s quick step performance fell a bit flat, Fair City alumnus Aoibhín Garrihy put on a big smile and did her best Debbie Reynolds impression, promptly placing her as one of the top dancers on the judges’ leaderboard. And rightly so.

Dayl Cronin was as rigid as a Ken doll as he tangoed to One Direction’s Drag Me Down (a slight dig at his HomeTown boyband past?), and judge Lorraine Barry of Billie Barry fame said his Argentinian dance looked more like the Spanish dance the paso doble. Consider the gauntlet firmly thrown down.

Actually performing the paso doble on this week’s show was sports broadcaster Des Cahill. Dressed like a matador and with the elegance of a bull with four left feet, it’s safe to say that it’s his likability, and his partner Karen Byrne’s patience, that will keep him in the competition. Meanwhile, Eva Orsmond earned the nickname Dr Eleganza from judge Julian Benson with her graceful foxtrot.

Tonight, more than anything, comedian Des Bishop brought face. Dancing a mild salsa to Wham’s Club Tropicana in a fluorescent blazer, Benson says that if George Michael was looking down on them, he’d be very proud. A very likely scenario.

Thalia Heffernan was probably this week’s most improved dancer and she even managed to soften Brian Redmond, the strict judge, who said that her Rumba was “technically an excellent performance”.

Leading the judges’ leaderboard is Red Rock’s Denise McCormack ,whose tango was, according to Barry, a “masterclass” in tango. Earning a standing ovation with her partner Ryan McShane, she raised the bar for the rest of the couples left in the competition.

Now that public voting is in action for the remainder of the series, the 10 remaining couples will have to work doubly hard to please the judges as well as entertaining the viewers at home.

The Books Quiz: Who wrote the famous line: ‘Hell is – other people!’
6

Róisín Murphy: If I want to be famous I can just go to a gay club
8