Culture Shock: The dole queue Dadaism of the Rubberbandits 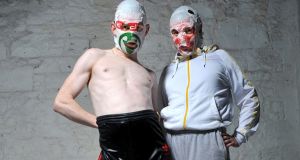 Rubberbandits: the pair say they are not comedians or entertainers but artists

More than 40 years ago, in 1975, the celebrated Irish artist Brian O’Doherty, working under the name Patrick Ireland, made an installation from turf in what was then the Hendricks Gallery. O’Doherty recalls an editorial “asserting with confidence that this trick or stunt was not art”. Of course it was. At the end of the exhibition the US artist Jo Baer, living in the Irish countryside, took a donation of the work, and later wrote to O’Doherty: “Your art kept me warm all winter.” Despite this, it remains a significant piece in the artist’s canon.

Quite apart from the subtleties of a turf rick in a Georgian building in Dublin, O’Doherty’s Rick was art because the artist said it was. It’s a tradition established by Marcel Duchamp almost exactly century ago, when, in January 1916, he coined the term “readymades” for the found objects that he decided to reclassify as art. The best known of these is the porcelain urinal that he sent, a year later, to the first annual exhibition of the Society of Independent Artists in New York, on the basis that its rules said it would accept all works from artists who paid the fee. With this, Duchamp created conceptual art – and the idea that an artist has the power to declare anything an art object and, in the process, make us look at it differently. As the editorial in The Blind Man, the Dadaists’ short-lived journal, put it: “He took an ordinary article of life [and] created a new thought for that object.”

So what are we to make of the Rubberbandits? The Limerick duo, performing as Blindboy Boatclub and Mr Chrome, hide their identities under plastic bags. Their projects have extended beyond 2010’s anthem Horse Outside to an RTÉ “documentary” on 1916, a theatre show, Continental Fistfight, at the Peacock in Dublin, an appearance at the EVA International biennale, in Limerick, and a performance at Sean Lynch’s Venice Biennale exhibition last year. The pair say they are not comedians or entertainers but artists.

If they are artists they don’t look or act like most we might be familiar with, so what does the term mean in relation to their work, and does it even matter what they call themselves? “We frame ourselves as Gas C**tist artists . . . a form of Dole Queue Dada,” says Blindboy, whose Late Late Show turn last month revealed a fierce intellect, which I also encountered when we shared a conference panel. There, his views on how creativity in children can be routinely stifled by the education system were intensely felt, and striking.

Does that make him an artist, though? Ask him about the gallery and museum traditions of experiencing art and you get a viewpoint that those institutions “preach only to the converted. They remind us of churches, pure solemn and inhabited by very silent people who don’t open their mouths, for fear that someone else might find out that they don’t fully understand the art that’s on display. Art galleries in Ireland,” he continues, getting into his stride, “are like big vegan churches, and the curator always wears black, like a priest, and the visitors are there for the free wine. Most people who attend Irish galleries are other artists, and they all whisper to each other about commissioning opportunities inside imaginary confessional boxes.”

He has a point, but it’s a point that misses a great deal about what else goes on in art galleries: just head to Project in Dublin this month for Núria Güell’s Troika Fiscal Disobedience Consultancy, which brilliantly advocates corporate tax-avoidance strategies for all as a means of changing the status quo. Then there’s RHA’s Lost Fridays, when bands, DJs and dancing take over the building. It’s easy to decide the art world is a certain way until you get under its skin.

Nevertheless, the Rubberbandits occupy an interesting position of critique, and asking for it to be seen as art is asking for us to pause, stop and think about what they have to say rather than just laughing or singing along. Some of it feels a little like opportunism, like having your cake and eating it. On the decision to show in a gallery in Japan last year, Blindboy says, “We contributed two music videos to the show as installation pieces, Spastic Hawk and Shift Girls. The reason we were comfortable exhibiting in a gallery this time, though, is because we believe the creative turn was not necessarily the works we had placed in the gallery but, rather, the act of participating.” Indeed.

Ask him what art is for, however, and it gets more interesting: “It’s for putting ideas about life and society into an alternative language to the dominant one and starting new conversations.” Ask him what the Rubberbandits’ art is for – “Distracting ourselves from the inevitability of death, and having craic” – and I’m starting to like the idea very much.

“Art” is a space slightly outside society where new ideas can be explored and tested, and the art world is constantly reflexive, and capable of change. Yes, there are large institutions that remain resistant to that, and there’ll always be people who don’t like new voices changing the terms of the debate. But as Duchamp and O’Doherty have shown, some actions can alter everything, forever. If it takes calling them artists to make people open up to their thinking, and to thinking differently, then let’s do it, and let’s have more artists like the Rubberbandits. But don’t write off the rest of the art world, either.