Last month, an US couple released a video game about their son who died from a terminal illness. Is the artform aspiring to a new maturity? 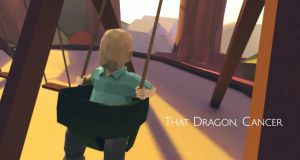 That Dragon, Cancer: the game offers various perspectives on ‘a journey of hope in the shadow of death’

It’s not easy to imagine video games, which have long rewarded players for being ruthlessly self-centred, as channels for empathy and compassion. The take-away message from early arcade games was rarely that we should sympathise with the space invaders. And, as games entered the home, Super Mario Bros did not encourage many to see things from the sorcerer’s perspective. When Tetris or, a hard blink later, Angry Birds put pacification devices into our hands, few people ever paused to consider the feelings of a brick or a docile green pig.

If video games and morality have been considered in the media, it is usually with the hand-wringing fear that they serve merely to rehearse our worst impulses towards violence and destruction, something that the countless murdered prostitutes in the Grand Theft Auto series are in no position to contradict.

Now that videogames are staggering into middle age, though, just like the first generation to grow up with them, there are signs that the artform is aspiring to a new maturity. When, last week, the collapsing and apparently debt-ridden circus that is Kanye West revealed his new fashion collection and a preview of his new album, you might have missed his new video game, Only One. A trailer screened at Madison Square Gardens revealed a grandiose eschatological theme, in which his late mother ascends into heaven on the back of a winged horse. When the clip drew insufficient appreciation from the crowd, West played it again: “Y’all just be acting like that s**t is regular,” he complained. Perhaps it isn’t, but as the substance of videogames becomes more complex, West isn’t alone in using interactive technology as a memorial.

Last month, a grieving American couple, Ryan and Amy Green, released a video game about their five-year-old son, Joel, who died from a terminal illness. The game, That Dragon, Cancer, is remarkable for many reasons, describing itself as “a journey of hope in the shadow of death”, during which the game offers various different perspectives. It opens with a scene as viewed by a duck on a pond, to whom Joel is feeding bread, and the journey continues along paths both literal and abstract. You hear documentary audio from his anxious parents, dealing with both the heartbreaks and banalities of illness. A hospital gurney is discovered, with a lick of the surreal, on a beach. Transported to a cancer ward, you watch Joel, resting on his father’s stomach, as he receives chemotherapy, but the player’s perspective switches to the father’s eyes – even slipping into his tormented dreams.

As a game, That Dragon, Cancer is deliberately subversive – players often have little control over what’s happening, an emulation of the Greens’ helplessness. “One of the great strengths of video games is that automatically a player goes into a game expecting to have some agency,” Amy Green told the New York Times. “And it felt like the perfect way to talk about cancer, because all a parent wants is to have some agency.” For much the same reason, video games have also been used in recent years to give players a sense of depression, in some cases to help relatives of people with mental health problems to understand that they are not always in control of their responses.

One artful example is called Elude, an elegantly designed platform game, in which you steer a young figure up through rising tree branches, and “power-up” by coming into contact with songbirds. But you are equally likely to find yourself sinking helplessly into a subterranean morass, without much explanation. Another, simply titled Depression Quest, is an online interactive text game about living with depression, created by Zoë Quinn, in which the player’s choices are sometimes brutally inaccessible.

It would be comforting to believe that, if games have increasingly come to programme us – helping us to define ourselves, our goals or our approach to problem-solving – that these games can power-up our better instincts, with a novel-like capacity for seeing the world through the eyes of others. The truth is more complicated, and often more depressing. Zoe Quinn, the designer of Depression Quest, was the earliest target of gamergate, a campaign of anonymous harassment and misogyny which sometimes resembled the “kill screen” for the human race.

Even those who take videogames seriously can be skeptical about any edifying potential. Anna Anthropy, whose memoir game Dys4ia was based on her experience of gender dysphoria and hormone replacement therapy, ultimately doubted the game’s capacity to instil fellow feeling. And the author Michael W Klune’s recent memoir of childhood and adoloescence, Gamelife, structured around 1980s games, concludes with its isolated narrator struggling to reconnect with his analogue acquaintances.

While considering videogames in the context of rave culture, the comedian Marcus Brigstocke famously quipped, “If Pacman had affected us as kids, we’d be running around in dark rooms, munching pills and listening to repetitive electronic music.” Who knows what videogames have primed us for as we progress up the levels? But, now that gamers have equal access to pixelated nostalgia and arthouse offshoots, there has to be a more meaningful benefit than the perfection of hand-eye coordination. Otherwise, game over, man.