Seriously ill with throat cancer, Myles na Gopaleen had some strong words about his former colleagues in the Civil Service in his final Cruiskeen Lawn column before his death, on April 1st, 1966 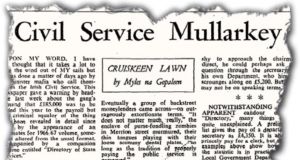 Upon my word, I have thought that it takes a lot to take the wind out of MY sails but it was done a matter of days ago by the sinister mafia who call themselves the Irish Civil Service. This newspaper gave a warning by headline last week about the gang’s demand that £185,000 was to be added to the payroll but the criminal squalor of the thing has been revealed in detail since then by the appearance of an Estimates for 1966/67 volume, somewhat altered from the usual format, accompanied by a companion volume entitled “Directory of State Services.”

“Still More Pay for the Boys” is the leitmotiv, and the Directory takes the unprecedented step of giving the actual names of the money-crazed clerks, rather perhaps as a film magazine would name film stars, with breathless hints at their earnings. Our clerks in the State service are proud of themselves and anxious to make it clear to distant relatives, possibly as distant as the U.S.A., that they are no longer snagging turnips or footing turf on the ancestral farms of scraws but that they are in a large office in Dublin and that on mucky days they wear galoshes.

And at what time is the “gimme, gimme” anthem raised? At a time when, thanks to those same slobs, the country is bankrupt. The empty national creel was hawked from the Treasury to the White House to the bazaars of Baghdad in search of a measly £6 million, but the emissaries were told to keep moving – not a cent would be given on any terms. Eventually a group of backstreet moneylenders came across – on outrageously extortionate terms. “It does not matter much, really,” the enclave of purse-fondling zombies in Merrion street murmured, their thin tongues playing with their loose scummy dental plates, “so long as the tradition of properly paying the public service is preserved.”

An innocent bystander may ask: “Why doesn’t the Minister do something about those boys?” Is it poor Jack Lynch? Jack is a terror in a football jersey but about public Finance he knows . . . well . . . as much as predecessor Jim Ryan – and that is nothing at all. But he has had it made crystal clear to him, on his diminutive screw of £2,200, that the pay of the State hoodlums is fixed and increased by themselves and that they are none of his business. He cannot dismiss, promote or ennoble financially any State employee without the authority of his “own” officials: if he were to try to assert himself, God knows what Profumo scandal would be fabricated to put him permanently in his box.

Recently in the Dáil he made a scandalously groundless apologia for the open-handedness of officials with themselves, saying that in outside business undertakings it was quite usual for the top man in a firm to have £6,000/£7,000 a year.

I would call that sort of talk a pack of lies only that I know the simple man was put up to saying it by whom you know.

One gentleman of my own acquaintance who is himself involved in 10 companies does not think there are more than a round dozen of people commanding a salary of over £6,000 – and he is roping in such giants as Guinness, international oil companies and the like. The Minister could have learnt the truth from the Revenue Commissioners, the chairman of which body is paid £5,025. If he were too shy to approach the chairman direct, he could perhaps ask the question through the secretary of his own Department, who himself scrounges along on £5,200. But they may not be on speaking terms.

Notwithstanding the apparent candour of this “Directory,” many things remain unexplained. A preliminary list gives the pay of a departmental secretary as £4,350. It is absurdly princely pay for a clerk, but the two examples above show how valid the statistic is in practice.

I’ll have a lot more to write on these themes. I want a little time to consider the Budget mess. But mark this: the bar in salary increase for anybody now being paid £1,200 or over is a direct result of what I have written on this subject in recent weeks. They fear the Irish Times, and please God we’ll yet have the stable even cleaner.

I thought I knew everything about grief, until my 21-year-old son died
Real news has value SUBSCRIBE