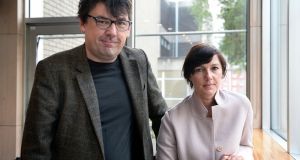 Complaints against Ray D’Arcy in relation to an interview he carried out with Father Ted writer Graham Linehan and his wife Helen have been partially upheld. File photograph: Eric Luke/The Irish Times

Pro-choice and anti-abortion campaigners have clashed over the latest Broadcasting Authority of Ireland (BAI) ruling on coverage of the issue.

Complaints against Ray D’Arcy in relation to an interview he carried out with Father Ted writer Graham Linehan and his wife Helen have been partially upheld.

The BAI’s compliance committee said the interview which was broadcast on RTÉ Radio One’s The Ray D’Arcy Show on October 19th last year breached its code of fairness, objectivity and impartiality in news and current affairs.

However, it did not uphold a complaint that Mr D’Arcy had acted in a partisan manner.

Complaints were made by two listeners. June Twomey accused Mr D’Arcy of promoting his personal views in relation to abortion and suggested that he had not challenged his guests’ views sufficiently.

Brendan O’Regan maintained the Linehans were advocating for a change in the Irish constitution and therefore the interview “lacked balance, impartiality and fairness”.

On the programme the couple spoke about their experiences in 2004 when Helen found their 11-week-old foetus had a fatal foetal abnormality. They were living in the UK at the time. She had an abortion.

They decided to go public as part of an Amnesty International’s She’s Not a Criminal campaign which is seeking to repeal the Eighth Amendment of the constitution.

RTÉ sought to argue that the item as broadcast was essentially a human interest story and did not need to be balanced by the use of an alternative anti-abortion voice.

That claim was rejected by the compliance committee who found their personal interest story was “secondary and set out so as to encourage support for the Amnesty International campaign”.

The committee noted the producers had sought to balance the programme by including statements from anti-abortion organisations.

The presenter had also raised alternatives to abortion, but the committee held that these attempts were “cursory and the issues highlighted by those statements were not examined in any detail by the presenter with his guests”.

The Linehans said in the interview that they were seeking a change in the Irish constitution. Therefore the committee held that attempts by the programme to provide other perspectives were “insufficient particularly where there were no other contributions via interviewees and where the presenter did not challenge in any sufficient manner the views of the interviewees”.

Amnesty International Ireland executive director Colm O’Gorman said he disagreed with the BAI decision and warned it would have a “chilling effect” on the debate.

He pointed out Graham Linehan had tweeted after the interview that D’Arcy had taken a anti-abortion perspective and it had made for a better interview.

Mr O’Gorman maintained it was important that people’s first-hand experience of abortion should be allowed without having to resort to an alternative viewpoint.

“The need to have someone taking an opposing view to a couple of who have made this decision [to have an abortion] is a bit obscene frankly,” he said.

“It would never be appropriate for somebody in my organisation to tell a couple who decided to continue with a pregnancy that they were not entitled to make that decision. It is unthinkable that we would seek to rebut that argument.”

The BAI decision was welcomed by Cora Sherlock of the Pro Life Campaign. She said Mr D’Arcy had been taken to task in a similar ruling in December after an interview he conducted with Mr O’Gorman on the subject of abortion.

“The time has come for RTÉ to rein in Ray,” she said. “It’s not acceptable for Ireland’s taxpayer-funded broadcasting station to continue to provide a platform for presenters to promote their own personal agendas.”

A spokeswoman for the BAI said in response to criticisms of the decision that the code is regularly revised, and periodic reviews are undertaken.

“The BAI considers sectoral developments, as well as public and sectoral views during the consultation process. The views of stakeholders informs the revision of all BAI codes.”

Normal People: Full-frontal nudity was not its most radical feature
8

The Mystery of Charles Dickens: A strange life led in the public eye
9