Mayday mayday, a five-part drama that's a crime against thrillers

The quietly gripping Broadchurch and subtitles that speak volumes 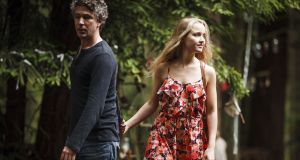 Long drawn-out: Aidan Gillen and Leila Mimmack in the series Mayday, which was two episodes too long

Perhaps I have watched too many crime dramas, but any time a station radically changes its schedule to make room for a series, I suspect all is not right. So when Mayday, a five-part murder mystery, aired this week on consecutive nights on BBC One, it had all the signs of a TV executive thundering that, yes, although it cost a fortune, it turned out to be a bit rubbish so it was best to get it over with as quickly as possible.

And Mayday was a clunker: as subtle as Midsomer Murders and as edgy as an episode of Lewis . The topnotch cast, including Aidan Gillen, Peter McDonald and Sophie Okonedo, were reason enough to tune in, but the first episode, on Sunday night, killed it.

The ethereal May queen Hattie – Leila Mimmack miscast as a 14-year-old but looking a very mature 20 – was cycling through an idyllic English village on her way to the May Day parade, and she disappeared. Episode two generated some vague suspense about whether she had run off, but she was later found murdered. And there were deranged-looking potential killers everywhere: Gillen, the shifty next-door neighbour with an evil glint in his eye; the mild-mannered policeman (McDonald) who left a bloody shirt in the laundry basket; the town’s forest-dwelling crazy person, who stared and mumbled a lot; her dodgy-looking dad, the creepy teen next door; her unlikable vigilante uncle, with his bad skin and hacked haircut; the property developer in his attic making a model of his ghost estate, complete with a teeny model of a girl hanging from a teeny tree.

So many potential murderers, so much time: five drawn-out hours of telly to get to whodunit. And with so many characters hamming it up in the spotlight from the start, they all had storylines that needed tying up, with varying degrees of credibility. The supernatural overlay, in which pebbles kept dropping from the sky or the ceiling into the lap of Hattie’s twin as a sign from beyond the grave, was just annoying.

I won't give away the ending, although you’d have guessed it by episode three, because the five-consecutive-nights structure means most people with any sort of lives probably recorded it for later viewing. And if you have, and are still keen, watch episodes two, four and five. The rest is just padding.


Prickly team
There was no need to watch Mayday anyway, as Broadchurch (UTV), the far superior crime drama, began on Monday. The setting is an idyllic seaside town; Det Sgt Ellie Miller (Olivia Colman) arrives back from maternity leave to find not the promotion she expected but a newcomer, DI Alec Hardy (David Tennant), in her place. He’s been moved from the big smoke after some as-yet-unnamed mistake, and on his first day the body of a young boy is found. As TV cop couples go, they make an interestingly prickly team, her quietly indignant at being pushed aside while trying to hide her emotional response to the death – the boy was her son’s playmate – and him, the chippy outsider, insensitive to the nuances of small-town life.

The murder shakes the community, revealing secrets hidden under the surface and exploring the impact on a town and a family when the national media descends. There’s a touch of the Danish crime drama about the eight-part Broadchurch : the unhurried pace, the character-driven plot and the underlying assumption that the viewer is actually quite intelligent and doesn’t need to be told every single thing. Unlike Danish dramas, which are relentless in their grey-sky gloom, Broadchurch is filmed in seaside summer brightness. It’s a perfect counterpoint to the grim story.

The writer, Colin Bateman, gave himself a good cast of characters to carry him through the eight episodes. On the staff are a belligerent old-timer (Donncha Crowley), a sparky young journalist (Kelly Gough) and an ad-sales woman (Caitríona Ní Mhurchu) who is on the take.

The first part, shown on Tuesday on BBC Two (last week on TG4), saw the local big businessman threaten unspecified nastiness if a story concerning his son wasn’t pulled. Which would be grand if not particularly riveting if the setting was a local newspaper in, say, Roscommon, but once you locate something in Belfast in an Irish-language newspaper, you open up a whole world of dramatic possibilities, political tripwires and expectations.


I’ve been mortified by many things on TV,

and I’m not even counting all those wince-making “put it away, love” scenes on Embarrassing Bodies (Channel 4), but this week was the first time I’ve been horrified by subtitles. The first in a two-part documentary, Communion Day (RTÉ One, Monday) followed children and their families in the run-up to the sacrament. Take that all those callers to Liveline who feel RTÉ does nothing positive about the Catholic church. It featured a diverse range of children, and, as is the way with these things, the similarities of the experience and simply the nature of being seven years old outweighed any cultural or economic differences.

The white-hot embarrassment came in the segment about Lorraine Nyambi from Limerick. She was born here and her parents – he works in Aldi, she’s an accountant – were born in Cameroon and came to Ireland in 2001. Her dad later became an Irish citizen. But every time the Nyambis spoke, subtitles appeared on screen. They were speaking English, perfectly clearly, if with an accent.

I need subtitles for Danish dramas, and for most things on TG4, but not if people are speaking English. So apologies to the Nyambi family. I know what they were saying but not what the programme-makers were trying to say.