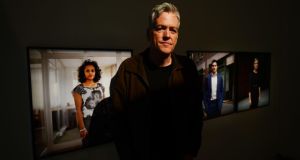 On the market: Mark Curran with three of his portraits of traders at the Gallery of Photography in Dublin. Photograph: Alan Betson/The Irish Times

Traders are crammed together like drones in a beehive. They labour at the Chicago Board of Trade, producing the honey of commerce.

They huge Andreas Gursky photograph from 1999 that they appear in offers a dense version of the market. Its players, who buy and sell shares in publicly quoted companies that dwarf them, are anonymous, reduced by the scale and purpose of the global-economy queen they serve.

Mark Curran, a Berlin-based artist who teaches at Dún Laoghaire Institute of Art, Design and Technology, attempts a more nuanced portrayal of global trade. His latest installation, The Market, tries to cut through the hubbub to understand a moment of capitalist flux.

His subjective study, which opens in Dublin today as one of the events to mark the centenary of the city’s Lockout, is the fruit of 18 months of hard-haggled access to the world’s stock exchanges. He renders the market in interlocking formats: a soundscape, artefacts and photographs. His subjects are pulled free of the morass. They become lone players, dignified, aware of their circumstance. They are not pawns of capitalism but its agents.

An ethnographer as much as a photographer, Curran uses life-size images as understated pieces of an elaborate conceptual jigsaw to investigate the global stock and commodity markets. “In Ireland we are always told we are at the mercy of the market,” he says. “Our narrative is about ‘returning to the market’. And while people have become more literate – and know about the IMF, the troika and so on – the process is still abstract.”

World’s newest stock exchange
Curran spent almost two years visiting exchanges, assisted by the Department of Foreign Affairs, the Arts Council and Irish Embassy staff. He concentrated on Dublin, London, Frankfurt and Ethiopia. “Addis Ababa is the world’s newest stock exchange. It set up in 2008, as the crash was happening in the West. I had two days of access. I used these to negotiate a further week, coming in every day with no equipment, just to talk to people and observe. As it panned out, I stayed for a month.”

Ethiopia smashed his preconceptions about capital and Africa. “One young woman told me, ‘What we are doing here is revolutionary.’ That’s not a word we associate with the market. She went on to talk about how they regulate and how they have a financial model that is not for profit.”

This intrigued Curran. “Small farmers and collectives are actually protected. It restricts any form of hyperspeculation . . . It challenged my notion of the role of the market. This exchange is now quoted in New York, Nigeria and Mumbai.”

Physical exchanges are trading themselves out of existence, often turning into museums, as the dealing moves to the ether. “It has become all about algorithms and black boxes. The market is less about site and more about online immateriality. This suggests capital has no national identity and it seeks, in its present form, to be stateless.”

The algorithms that trading houses use analyse market data and make decisions. About 80 per cent of trading in the US is done in this way, and about 50 per cent in Europe. Within a decade there may be no human traders. “These algorithms add a thing called ‘noise’ to the market, and then ‘volatility’. They take positions for a nanosecond. It’s a numbers game. They call it things like ‘chasing alpha’ and ‘racing to zero’, all these beautiful metaphors. And this process overwhelms the industrial, the political, the military.”

Curran’s brother, Ken, a composer and software developer, has written an algorithm for the installation’s soundtrack. It scans the speeches of Minister for Finance Michael Noonan (and British chancellor of the exchequer George Osborne in an almost concurrent Belfast show) and feeds back articulations of the word “market”.

Lockout versus lock-in
Curran says his work links to the commemoration of the 1913 Lockout. “The lockout was about exclusion and invisibility. So is the market. In 1913 there was a more direct relationship between labour and employers: there was direct action.”

If there was a lockout of labour then, would Curran buy the idea that the market locks in the State today? “Yes. Where labour was a commodity then, now, in a neoliberal age, the nation state has become a commodity, one locked into the narrative of the market. As we speak there are people hedging on Italy failing, on France failing, on Spain failing.”

He was denied access to Frankfurt. “This has meaning in terms of exclusion, of being locked out. Access is very important in studying power – the powerful generally aren’t available. The abstractness of the market becomes a strategy of the market. I use the common representation of the Frankfurt exchange, a space with circular white structures. The Deutsche Börse, which owns this, describes it as the ‘television studio’: it has become a media backdrop to the performance of the market. I would argue that is all it is.”

The Market is at the Gallery of Photography, Dublin, until October 1st and at Belfast Exposed from next Thursday until October 11th; a smaller version, The Normalisation of Deviance, is at Limerick City Gallery of Art

Radical Wordsworth: Focusing on the ‘spots of time’ of poet’s greatest work
8