Tin Star: Tim Roth is stuck in the Rockies, with plenty of time to waste

Tin Star plays merry havoc with chronology and character, but to no real consequence 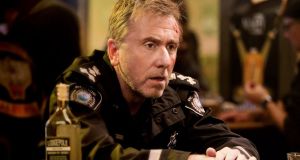 Nothing signals the manufactured breathlessness of a television drama better than that ubiquitous legend, flashed up after some early hubbub: “Two weeks earlier.” How did we get into this mess, pray tell?

In the case of Tin Star (Sky Atlantic, Thursday, 9pm), which judders back and forth along an otherwise sluggish timeline, we backtrack by a whole year. Narrative scholars will point out that a roughly similar technique was good enough for Homer, but that showrunner never resorted to the title card of panic.

Rowan Joffe’s new drama, fronted by a slouched and grizzled Tim Roth, suggests that in the absence of a good hand it will furiously shuffle the deck. This is allied to some sturdier tropes: the split-personality motif and the new-sheriff-in-town premise. Character and context follow suit; both are here to be rejigged.

After a brutal scene of life-changing violence we plummet – you guessed it – to one year earlier in this small, peaceable outpost of the Canadian Rockies, Little Big Bear, whose name suggests a town built on indecision. It is to here that London police chief Jim Worth (Roth), now two years sober and not the man he used to be, has moved with his happy, sardonic family in search of a simpler life and equally undemanding storytelling.

Now the town is a serene polluted cess pool

A serenely boring place, populated by small town types, it is taken in by a sleek corporate shill, nicely played by Mad Men’s Christina Hendricks, who persuades these simple Canucks that the North Stream Oil refinery and its band of merry psychopaths are just what the town’s economy needs. One year later! Now the town is a serene polluted cess pool and vocal objectors are meeting with mysteriously ruinous consequences.

If you’re familiar with Mad Max, Gladiator or any story in which a family man with a dark past will be set loose as a whirling dervish of violence and revenge, you’ll probably know where this is going. But Joffe has nine more episodes to get through, and a whole other series already commissioned, which gives him plenty of time to waste.

A later episode uses a digital clock display to track back and forth throughout one supposedly tense day, until only the artificiality of its telling becomes truly murderous. Given that one clearly devastating event seems to have barely registered for Roth’s sullen protector, this concentration on temporal fracture comes at the expense of any emotional consequence.

Another stylised disjunction is between Roth and his own reflection, which will stare back at him like an inert Mr Hyde, or another actor waiting patiently in the wings. It is limpid, anticipatory and entirely unfeeling. If all fixed points are negotiable, whether on the clock or the mirror pane, a viewer might take heed and stop following too.