What happens when civilians join a therapy group in Folsom Prison 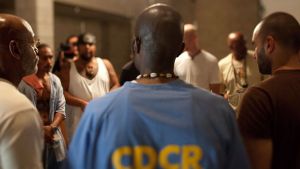 The SXSW documentary competition winner is a fascinating chronicle of catharsis. Every year Folsom Prison, the maximum security institute immortalised in song and visitation by Johnny Cash, allows several members of the public through the gates to take part in the Inside Circle, an intensive four-day group-therapy programme. The work of the title refers to the exorcism-like process that occurs during the interactions between society’s most hardened offenders, the visiting civilians and the prison’s resident counsellors.

Participating inmates must agree to leave their colours and gang affiliations at the door, so the viewer finds themselves in the company of a Crip, a former Blood, and members of the Pacific Islander Brotherhood, the Aryan brotherhood, and the Native American brotherhood.

We got a live one here

They speak with one another compassionately and soulfully. If anything it’s the outsiders who are the trickier subjects. An early encounter with a visibly angry teaching assistant prompts other group members to remark: “We got a live one here.” Another softly-spoken twentysomething, who isn’t entirely sure what to do with his life, is fretful that he won’t produce tears on cue: “I didn’t come here looking to cry, and I don’t want to feel like I’m letting them down if I don’t.”

In the end, everybody cries. In keeping with the peculiarly American preoccupation with abusive and absent fathers – a theme that forms the spine of countless movies and legal defences – there is a great deal of chatter about damaging dads. This is only a prelude to the real business of rage-letting.

The process . . . can look and feel like raw performance art.

There’s something indescribably moving about watching grown men – at least one of whom has tried to cut another man in half – wail and sob. The process – which falls somewhere between primal scream therapy and a howl as described by Allen Ginsberg – can look and feel like raw performance art. Arturo Santamaria’s camera-work and Amy Foote’s shrewd editing leave the viewer, like the participants, with no place to hide.

Court videographer Jairus McLeary (who codirected with Gethin Aldous) has been participating in Inside Circle groups since 2003, and his reverence shows in every frame. Never mind SFX and explosions: these emotional pyrotechnics make for the most sensorial experience you can have in a cinema this year.

‘Black hair is so much more than hair’: Emma Dabiri’s passionate exploration of identity
7