The walls come down in the modern library 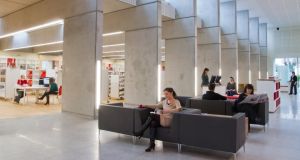 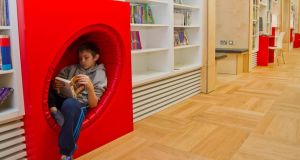 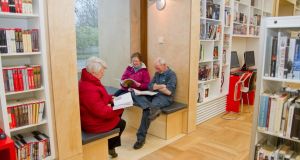 What comes to mind when you hear the words “public library”? Is it a low-ceilinged stuffy room with rows of bookshelves and a cluttered noticeboard filled with posters for events already past? A quaint red-brick building – funded by Andrew Carnegie, the Scottish philanthropist who made his fortune from steel in 19th-century America – that you can barely get a buggy into, never mind a wheelchair? Or is it a bright new space with wifi and ebook stations, self-service check-in and bookshelves that can be pushed out of the way when performance space is required?

While that last description might not yet be everyone’s experience, turning libraries into multi-purpose community hubs is the goal of the Irish public library service, and it’s one of the few areas of civic society that appears to be benefiting from public funds even in these recessionary times.

In Ireland, there are several recent examples of libraries with architect- designed extensions or stylish internal refurbishments that are redefining the space for 21st-century community demands. And, in a year that has seen more than 100 public library closures in the UK due to funding cuts, Irish public libraries are thriving. A draft Strategy for Public Libraries for 2013-2017, published by the Department of the Environment, Community and Local Government, sets out ambitious plans for the growth of public libraries in the context of people’s changing needs.

‘Libraries are civic, democratic, safe’
Librarians themselves are broadening their vision of what people expect from their local library. “As a lot of public buildings – like post offices and banks – disappear, libraries might be the only neutral, trusted space that give people a sense of place and identity in their communities,” says Margaret Hayes, a Dublin city librarian.

“Libraries are civic, democratic, safe spaces where people can go to meet, to sit down, to book holidays, plan businesses or simply get some head space where nobody will annoy them,” says Mairead Owens, a county librarian in Dún Laoghaire- Rathdown.

There is an ongoing up-skilling of librarians for these new roles. “In the past, libraries attracted quiet, reserved, highly educated staff, but now I’m saying to my staff: you have to engage with users and steer people to reliable sources in this digital age,” says Owens.

One key decision that has been made about Irish public libraries is that they will remain free. There are also plans to have a national library card, which will allow people to browse and borrow from catalogues outside their local areas. This initiative requires connected library-management systems, the first of which will be put in place across the four Dublin library services in Fingal, Dún Laoghaire-Rathdown, South Dublin County Council and Dublin City.

The changing role of libraries from repositories of books to interactive community hubs is keenly felt in the South Dublin County Council area, which introduced the first public library service to offer self-service check in to its users in Tallaght Library in 2008. South Dublin libraries also offer a digital archive of photographs (including interactive historical local maps from 1760 onwards), videos and directories. The south Dublin library service also loans downloadable ebooks and magazines ranging from Cosmopolitan to National Geographic.

“It’s all part of the ‘libraries without walls’ idea, where customers can go online to download a book from their local library service in the middle of the night or on a beach in Barbados,” says Kieran Swords, who is in charge of technology developments in south Dublin libraries. Many libraries are now focusing on digitising local history.

The main reading room runs parallel with movable book shelves, individual pods for reading, working or feeding your baby (which one library user was doing when I visited), and a children’s area with rugs, low shelves and beanbags in den-like spaces. There’s also a computer room, exhibition space and a quiet reading room.

“There has been an overwhelmingly positive response to the new library, which opened in February,” says Mairead Brady, librarian at Ballyroan. “In the mornings, we have the older generation, mothers and toddlers and class visits. After lunch, we have children doing their homework and, later, exam students and mature students.

“There is incredible demand for computer courses. We host events during the Red Line Book Festival [a South Dublin Libraries book festival that runs from October 15th to 23rd], and we hope to host a Coder Dojo club soon.”

A new Central Library and Cultural Centre will open in Dún Laoghaire next September. The four-storey building will include general reading rooms, a public “living room”, auditorium, municipal gallery, restaurant, genealogical centre and writer-in-residence space, and the current Dún Laoghaire Carnegie library will close. “It is a traditional building which is difficult to access with a buggy or a wheelchair, but there is a preservation order on the building itself,” says Mairead Owens.

The new library will be part of a new cultural quarter with Moran Park House as a craft centre and artists’ studios .

“The days of the librarian sitting behind the desk being authoritarian are gone,” says Owens. “We will have to manage the space so mums, dads or au pairs can read to children, and other people can do business research or book their holiday flights. It will bring life back into Dún Laoghaire and link the harbour with the town.

“There are plans for the library living room to be open on Sundays and late at night as an open space for people to use.”

Plans for Central Library
In Dublin city centre, librarians are excited about plans to move the Central Library in the Ilac shopping centre to Parnell Square North in 2017 as part of the city’s new cultural hub.

“We hope to have places for 1,000 people to read, research, reflect and learn,” says Margaret Hayes. “We want to build on aspects of the Central Library in the Ilac centre to support enterprise and employment. The Central Library is currently a truly international library. Learning English – online language learning in the library and remotely – is a big part of the service we offer there.”