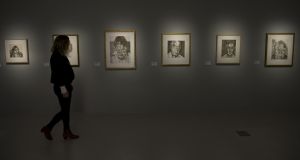 At a preview of the IMMA Collection; Freud Project 2016-2021 which will open to the public on Friday 21st October, at the Royal Hospital Kilmainham, Dublin. Photograph: Dara Mac Dónaill / The Irish Times

What were your cultural highlights for the year gone by?

Mick O’Dea did well in getting his outstanding 1916 show in early, in January, before an endless succession of commemorative exhibitions. The Frank Auerbach retrospective at Tate Britain was superb. Elizabeth Price’s survey show at The Model, Sligo, was brilliant, as was Aideen Barry’s survey at the RHA. Imma did well in winning 50 Lucian Freuds on a five-year loan. The National Gallery of Ireland’s Creating History, a kind of alternative, episodic history of Ireland from the 17th century through art, is compelling. Among too many outstanding solo shows to mention were those by Sabina Mac Mahon and Vanessa Donoso Lopez, both at The Lab, Enda Bowe at Visual, Amie Siegel at Temple Bar, Hughie O’Donoghue at the Galway Arts Festival, John Kelly and Ed Miliano at Oliver Sears, Paul Doran at Hillsboro Fine Art, Ann Quinn and Charles Tyrrell at the Taylor, and Una Sealy at the Ashford.

And what let you down?

A retrospective of the work of Irish painter Patrick Hennessy was long overdue. The suspicion was that he’d been unjustly neglected because he was gay and indifferent to artistic fashion. In the event, the show demonstrated that he had, to a significant degree, wasted his abilities, had a narrow and confining vision of painting, and an unintentionally kitsch aesthetic sense. Despite promise and definite achievements, repeated viewings of his work only highlighted his weaknesses.

What was the dominant plot twist of 2016?

Jaki Irvine’s If the Ground Should Open . . . looking to the role of Elizabeth O’Farrell and Julia Grenan in the Rising, was one of several bids to refocus attention on those marginalised by the dominant historical narrative. Alan Phelan’s attempt to imagine a future for Roger Casement if he had lived was another notable example.

How did our centenary celebrations strike you?

Against the slightly overwhelming setting of non-stop commemoration, historian Robert Gerwarth’s The Vanquished, a refreshing, enlightening and persuasive rereading of nationalism and the world immediately post-WWI, is bracing and, in the event, very relevant to the current historical moment.

And what will be your cultural resolution for 2017?