The trouble with what we call freedom

We like to believe that freedom and democracy are inseparable; that the toppling of a dictator means greater liberty. If only 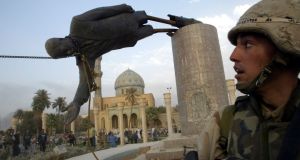 We believe freedom and democracy are inseparable. This belief forms the basis of attempts by western governments to export their political model to countries such as Iraq, Afghanistan and Libya. Above, a US Marine watches as a statue of Saddam is toppled in central Baghdad. Photograph: Goran Tomasevic/Reuters

In February 1917, a young boy was reading a Russian translation of a Jules Verne novel in a street in the city of St Petersburg (at the time called Petrograd), where a bookseller had laid out his stock in the snow. The boy heard a commotion and, looking up, saw a terrified man being frogmarched down the street.

The ashen-faced figure was one of the city’s policemen, who were among the last functionaries of the Tsarist regime to remain loyal. Discovered hiding on the roof of a building, he had been brought down to be taken to what he evidently feared would be his end.

What happened to the man cannot be known. But his deathly white face as he was marched away made an enduring impression on the boy who witnessed the scene.

Seven years old at the time, the young boy was the future philosopher and historian of ideas Isaiah Berlin, who spoke of the episode on several occasions in conversations I had with him in the last quarter-century of his life.

Berlin often contrasted the mood of optimism that accompanied the February revolution with the darker atmosphere that followed the Bolshevik coup that October. Yet the incident occurred during the first of these upheavals, and it was clear that the impact it had on Berlin had nothing to do with any differences between the two revolutions. It left him with a dread of violence that stayed with him after he left Russia in 1921 with his mother and father for a life in England, and right up to his death in Oxford in November 1997.

I believe there may have been a subtler effect on Berlin’s thinking, which has something important to say to us today.

Not long after the start of the 21st century, we like to tell ourselves an uplifting story in which freedom expands whenever tyranny is overthrown. We believe that freedom and democracy are inseparable, so that when a dictator is toppled the result is not only a more accountable type of government but also greater liberty throughout society.

This belief forms the basis of the repeated attempts by western governments to export their own political model to countries such as Iraq, Afghanistan and Libya. In this simple and seemingly compelling story, freedom and democracy are a package that can be delivered anywhere in the world.

An older generation of thinkers recognised that freedom and democracy don’t always go hand in hand. The 19th-century liberal John Stuart Mill was a lifelong campaigner for greater democracy, but he also worried that personal liberty would shrink once governments could claim to express the will of the majority.

Bertrand Russell, Mill’s godson, agreed. He shocked many when he observed that while Britain after the second World War was a more democratic society than the one he had grown up in, it was also in some ways less free.

For Russell, as for Mill, liberty was one thing, democracy another. It’s a deeply unfashionable view, but I think one that’s essentially correct.

We need freedom because our goals and values are highly diverse and often quite different from those of the people around us. Having a voice in collective decisions – the basis of democracy – is a fine thing, but it won’t protect your freedom if the majority is hostile to the way you choose to live.

Many will tell you that this danger can be dealt with by bills of rights that put some freedoms beyond the range of political interference. But politics has a habit of finding ways around the law. And when the state is weak, declarations of rights tend to be unenforceable.

Once you think of freedom as living as you choose, you will see that it’s not just tyrants that stand in its way. The world is full of failed and enfeebled states in which the main threats to freedom come from organised crime, ethnic conflict and militant sectarian groups.

If you live in some provinces of Mexico, you are likely to be more afraid of ruthless drug cartels than of corrupt and ineffectual governments. In parts of the Balkans in the 1990s, you’d be afraid of lawless irregular militias, operating on ethnic lines but often intertwined with organised crime. In these cases, freedom is threatened by conditions of near-anarchy rather than tyranny.

Yet freedom wasn’t enhanced for everyone once the dictator had been removed. Today, if you’re a woman and opt for a lifestyle that fails to square with a narrow interpretation of religion, you’re at risk of violent attack from fundamentalists. If you are known to be gay, you risk being hunted down and killed. If you belong to a religious minority such as Christians or Mandeans (a branch of Gnosticism that was practised in the region for some 2,000 years), you face persecution and risk of extinction.

Iraq today has a type of democratic government, but the state is too weak and fractured and politics too dominated by sectarianism to prevent these assaults on freedom. Syria is different from Iraq in many ways, but it’s hard to avoid fearing that a similar pattern is emerging there.

In the reassuring story we like to repeat to ourselves, the emergence of these new threats is just a phase – in time, these countries will achieve the type of freedom-loving democracy that we ourselves enjoy. But we can say this only because we’ve forgotten our own history and neglect the dangers we currently face.

Europe’s democratic nation-states came into being in a process that extended from the French revolution through the collapse of the Habsburg empire after the first World War to the break-up of former Yugoslavia. The transition included repressing the freedom of minorities, and it hasn’t ended with democracy and freedom co-existing in harmony as we like to think.

Coming from Russia, where the despotism of the Tsars was replaced by a far more repressive system of government, Isaiah Berlin didn’t need English liberal thinkers to teach him that the overthrow of tyranny doesn’t by itself expand liberty. But he was at one with them in understanding that liberty is a fragile achievement that can be undermined in many different ways.

We’ve come to believe a story in which freedom is the natural human condition, which only tyrants prevent everyone from enjoying. The reality is that when a tyrant is toppled, we can’t know what will come next.

When we tell our tale of freedom spreading across the world, we might pause to think for a moment of the young boy who looked up from his book to see a terrified policeman being dragged off to an unknown fate.

John Gray will give the Hubert Butler lecture at St Canice’s Cathedral next Saturday at 5pm as part of Kilkenny Arts Festival. kilkennyarts.ie