The moral sense of Down man Francis Hutcheson

The forgotten Irish philosopher liked to think the best of people 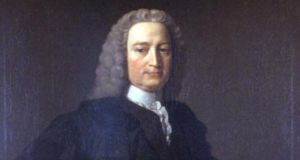 It’s just like a philosopher to be born and to die on the same date. Such was the fate of Co Down man Francis Hutcheson (August 8th, 1694, to August 8th, 1746), not a household name yet once one of the most influential thinkers of the West.

He spent 10 of his happiest and most productive years in Dublin, writing not only a rough draft on what became utilitarianism but analysing the nature of human emotions in a radically new way.

One of Hutcheson’s insights that still illuminates today is the idea that people are not wholly self-interested. Behind what seem like selfish acts are gestures of benevolence.

This led to the bold claim that humans don’t have just five senses (sight, smell, sound, taste and touch) but many more, including a sense of beauty and of humour but also, critically, a moral sense.

Prof Michael Brown, historian at the University of Aberdeen and author of Francis Hutcheson in Dublin, 1719-1730: The Crucible of his Thought (Four Courts Press) will explain further. On Hutcheson’s double anniversary, the man himself provides today’s idea, in his own words: “While we are only intending the good of others, we undesignedly promote our own greatest private good.”

Who was Francis Hutcheson?

“In 1730 he moved back to Glasgow to take up the chair in moral philosophy. He died in 1746, during a visit with friends in Dublin, and is buried at St Mary’s Church.”

Why was he important as a philosopher?

“Hutcheson was a key figure in the development of the Scottish Enlightenment. He corresponded with David Hume about the Scotsman’s A Treatise of Human Nature and taught the economist Adam Smith, who later held the same chair of moral philosophy.

“Hutcheson also coined the phrase ‘the greatest happiness for the greatest number’ as a way of thinking about what motivates moral behaviour, which was later popularised by the English utilitarian Jeremy Bentham. ”

What was his big idea?

“Hutcheson’s big idea was what he called ‘the moral sense’. At the time, most philosophers agreed with John Locke that human beings had no innate ideas: the mind was a clean slate when a human was born. Although Hutcheson agreed, he disagreed that this meant humans had no inherent moral character. Instead he argued that human beings were born with a natural capacity to approve or disapprove of people’s behaviour. Human beings are effectively judgment-makers.

“Importantly, Hutcheson thought that this moral sense was pre-rational, meaning that deciding whether something was right or wrong did not involve a calculation of your self-interest. In this he disagreed with Thomas Hobbes, who thought humans were motivated by personal interest and material gain.”

Was he at odds also with the religious authorities?

“Hutcheson’s idea of the moral sense was inherently democratic. He once said that a beggar has as much sense of morality as any philosopher, by which he meant that ethical judgments were the consequence of natural faculties, and did not rely on prior instruction.

“This idea that human beings are capable of moral decisions without the need for religious instruction ran against the grain of Presbyterian thought. Traditional orthodoxy asserted that humans were sinful and redemption could only come through faith.

“Hutcheson’s optimism about people’s moral capacity led to questions about his suitability as a teacher of moral philosophy in Glasgow. However, his teaching was instrumental in creating a generation of Presbyterian ministers in the Church of Scotland who took a more positive view of humankind.”

By emphasising the need for governments to rule with the people’s consent, Hutcheson gave encouragement to nationalist movements. But did he regard himself as belonging to a particular nation, or as particularly Irish?

“In Ireland, Hutcheson’s influence extended through his colleague at the Dublin Academy in the 1720s, Thomas Drennan, to the rising of 1798. Drennan’s son, William, was a founder of the Society of United Irishmen and was influenced by Hutcheson’s ideas. However, Hutcheson politically thought of himself as either an Ulster-Scot or as broadly British.

“While he retained many emotional ties to Ireland after leaving in 1730 his primary identity was probably religious, and given that the Presbyterian community was subject to some penal laws in Ireland, Hutcheson was acutely aware that his faith was under prohibition in the country.”

“Dublin in the 1720s had a vibrant cultural life. Hutcheson’s patron, Robert Molesworth, viscount of Swords, was himself an author and supported a number of other writers, notably the free thinker John Toland.

“Hutcheson also enjoyed access to the court of the lord lieutenant, John Carteret, and encountered William King, the Church of Ireland archbishop of Dublin whose An Essay on the Origin of Evil (1704) dealt with similar concerns to Hutcheson’s own thought.

“Dublin provided Hutcheson, a young Presbyterian teacher, with a fascinating, colourful and challenging set of contexts in which to think about moral life in a civil society, and he channelled these ideas into his ground-breaking philosophy.”

A walking tour of Hutcheson’s Dublin is being organised this evening by irishphilosophy.com, which will talk about his life and work. Numbers are limited; if interested make contact via the website or @cathyby on Twitter

Question: Was Dublin City Council right to pull the plug on Garth Brooks?

Francis Hutcheson replies: “That action is best, which procures the greatest happiness for the greatest number; and that, worst, which, in like manner, occasions misery.”

Seamus Heaney, our dad the poet, by Catherine, Chris and Mick Heaney