Unthinkable: The Philosopher Queens originated from ‘a disheartening trip to the local bookshop’ 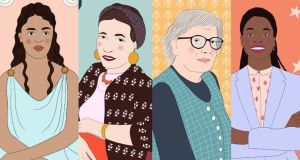 Plato and Socrates are household names, but what about Diotima of Mantinea? Only a handful of professional philosophers know of her yet she was the very person reputed to have taught one of the founding fathers of Greek civilisation while shaping the ideas of the other.

Diotima features in Plato’s dialogue the Symposium, where Socrates describes how he learned his style of argumentation – since called the Socratic method – from her example. By making a distinction between types of human affection, Diotima can also lay claim to inventing Platonic love, an idealised and non-sexual passion.

Diotima is not alone in being a forgotten woman of philosophy. Standard textbooks in the field tend to relegate women to footnotes. In his mammoth production The History of Philosophy, published last year, AC Grayling has chapters on 64 great thinkers: all are men. The first woman philosopher to get a mention is halfway through the book – and even then Harriet Taylor is referenced primarily in the context of her marriage to John Stuart Mill.

With The Philosopher Queens, Rebecca Buxton and Lisa Whiting hope to rebalance things, championing 20 women philosophers whose ideas have had a profound, but for the most part uncredited, impact on the world.

One of those featured is Diotima, whose existence is questioned by some, given the that only record of her comes from Plato. Another ancient sage profiled is Hypatia, who was hailed as a philosophical martyr by the Irish freethinker John Toland, albeit in a “clearly exaggerated way” to the extent that “he made up stories about her to advance his anti-Catholic cause”.

Buxton and Whiting discovered a shared interest in philosophy when they had a chance to learn it together at secondary school. Both are now in advanced studies at UK universities in the fields of human rights and public policy.

The idea for The Philosopher Queens emerged two years ago “following a disheartening trip to the local bookshop”, they say. The project was realised through a crowdfunding campaign, backed by a team of academics and authors who volunteered to write chapters for the book.

While the book is designed for a general reader, it was also “for our younger selves”, they say. “The two of us started learning philosophy together at 16 years old and were never told about any of the amazing women philosophers that appear in this book. If we had had something like this at that age, or even at university, it would have helped us to feel like we belonged in philosophy all the more.”

To coincide with the book’s formal launch today (September 17th), the authors spoke further to Unthinkable.

You have criticised AC Grayling for sidelining women in his recent book. Defending his approach, he makes a case for limiting philosophy to “metaphysical, epistemological, ethical and logical studies”, or “Meels” for short, so the subject doesn’t become too unwieldy. Is he right in characterising Meels as historically dominated by men?

Rebecca Buxton and Lisa Whiting: “Of course, the history of philosophy when defined as Meels is historically dominated by men. Doing philosophy in this way required a certain amount of privilege, education and access that women and other minorities did not often have until recently. However, Grayling’s book wrongly makes it appear as though women haven’t contributed to the histories of these disciplines at all…

“Just to take one example, there were a number of early modern women philosophers who contributed hugely to metaphysics: Margaret Cavendish, Anne Conway and Elizabeth of Bohemia to name only a few. To take ethical studies, again, there are so many women who have hugely impacted this area of philosophy: Mary Astell, Mary Wollstonecraft, Iris Murdoch and Iris Marion Young for instance.

“Even if women have historically been excluded from the typical institutions of philosophy, to paint a picture of the history of philosophy that does not include them at all does us all a disservice.

“History is not something that exists purely out there in the world for us to discover; writers like Grayling are participating in the act of creating the history of philosophy in the choices they make about who ‘counts’. So, we’re always going to be drawing on a list that has historically excluded not only women but also non-white, non-European thinkers as well.”

The women celebrated in the book have very different concerns and perspectives. What are the common traits that give them the title “philosopher”?

“Because of the expansive view of philosophy that we adopt, it’s sometimes hard to see the similarities between the women in the book. But all of them are importantly asking questions about the world and our experience within and interrogating possible answers to those questions. They’re all concerned, as much philosophy is, with central questions of human life and have important philosophical reflections to share.

“Interestingly, people often push back against this more expansive view of philosophy. For instance, they question including Mary Ann Evans [George Elliot] because much her writing was fiction. But this question isn’t raised for people like Camus, who is routinely portrayed as an important philosopher. We already apply this broader definition of philosophy to men, but we question it when women or non-white people become candidates for inclusion.”

Among those listed in the book, who is your favourite philosopher?

“We know that it’s a cop-out, but we really enjoyed learning about all of these women for different reasons . . . We might also question the notion of having a ‘favourite’ philosopher from the book.

“Something that we wanted to portray was that these women philosophers were amazing thinkers, of course, but they are also complicated, sometimes problematic, and difficult individuals. Arendt’s contribution to political theory was enormous, but she was also a controversial figure who wrote many problematic and often racist things. So it’s important to recognise that they are all complex.”

Is philosophy becoming a more welcoming place for women?

“We do think that there are reasons to be hopeful . . . But there is still a huge way to go, particularly in racial diversity and class.

“While the number of women philosophers in academic departments appears to be growing, the number of non-white women is still pitifully low. Likewise, philosophy is not a welcoming place for transwomen, and many have felt the need to leave the discipline altogether. We really hope that this is something that will change in the near future.”

The Philosopher Queens, edited by Rebecca Buxton and Lisa Whiting, is published by Unbound