The ethical minefield of arts sponsorship 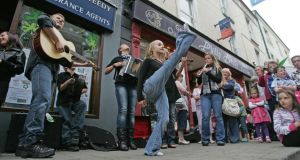 With “cuts” being the most uttered word in the arts sector, festivals have continued to look to private funders to make their events happen. But sponsorship too has become squeezed, with only a handful of festivals maintaining long-term partnership with brands or corporations. What does a “good fit” mean between brand and festival? And do ethics come into it when much-needed cash is available?

Fleadh Cheoil surely asked itself those questions as a backlash brewed over the traditional music festival accepting financial support from Shell. The oil company has a controversial reputation in the State, and the decision to take sponsorship from Shell was bound to anger and confound many observers, attendees and performers at the Fleadh. But one would also have to have a certain amount of sympathy for any festival that wants to fulfil its ambitions but doesn’t have a large professional team behind it.

Fleadh Cheoil ultimately announced it had “respectfully decided to return the financial support received from Shell”. Micheál O’Domhnaill, public relations officer for the festival, talked about how sponsorship is “very difficult to get. Even for a brand as well-known as Fleadh Cheoil, we’ve had a very tough time to get sponsorship in.”

The Fleadh has several avenues of public and private funding: partners in Sligo in the business community, hotels, bars, Fáilte Ireland, cross-Border funding and the Sligo Leader, to name some. But it’s a huge event, and, as many fund-raising volunteers in any sector will be familiar with, the bucket-shaking is constant.

“We didn’t have the situation where we had to identify ourselves with one single brand, so that did bring up extra challenges,” says O’Domhnaill. “We had a budget that we had to reach in order to enable us to implement the Fleadh we wanted to implement. There was a bottom line that we needed to get from private and commercial sponsorship, and the finance team have had a difficult, thankless, and almost continuous task of knocking on doors and trying to assess whether there was interest in supporting the Fleadh.

“The buy-in for the Fleadh could start in hundreds of euro and go right up into the thousands. So we have to be very creative to make sure the finance package was put in place.”

Save for some loitering logos, people will probably forget Shell’s clumsy association with the Fleadh after the festival halted the backlash when it threatened to tip over. But conversations around sponsorship are lively again, as more brands ease themselves back into the process of aligning themselves with festivals.

Business to Arts, an organisation that brokers partnerships between businesses and the arts or individual artists, also created a new strand of funding for Irish artistic projects through FundIt, a crowd-funding platform. Andrew Hetherington is the project director at Business to Arts.

“A title sponsorship is someone who has an immediate brand association at the naming level,” he says. Examples of that would be the Jameson Dublin Film Festival, which has become embedded in how punters refer to the festival: JDiff. Then there is KBC Great Music in Irish Houses and Sky Cat Laughs.

“That generally involves a sponsorship fee and leverage activity by the brand that would be at least a multiple of the investment in the festival. Leverage is all the additional activity outside of the fee for that brand alignment. They may take advertisements in print media, host a series of events, they might do other activities that all cost them money but aren’t included in the sponsorship fee.”

The next level down is a presenting partner. “These may sponsor a specific aspect of the programme,” says Hetherington, citing Dublin Airport Authority’s association with the Dublin Theatre Festival, or Electric Ireland at Electric Picnic. “Then as you move down, you might find partners, typically organisations that have an element of in-kind support that brings kudos to the event.”

Alcohol and other ethical dilemmas

Ethics is one of the key issues around sponsorship, post-economic slump. It’s not suitable for certain corporate sponsors to be engaged with certain family and children’s activities, for example.

“There has been a lot of debate around alcohol sponsorship, fast-food sponsorship, financial services sponsorshsip – whether it’s the right fit for organisations. While there may be a vocal proportion of people who might not like certain sponsorships, lots of the arts organisations that are entering those [deals] are doing so for specific reasons. It enhances the scope of what they can offer their audience.”

It’s difficult to find a festival that doesn’t have alcohol branding on display – Bulmers at Body & Soul, the Bacardi Bar at Electric Picnic, Heineken at Longitude.

Drop Everything on Inisheer in May is an exception. “I think it’s a choice,” says organiser Mary Nally. Events need to know what their ethos is, she believes, “and who you take money from should fit in with that. The bottom line is, if you’re the decision-maker in whatever festival, it should be in line with what your manifesto is. If it isn’t, then the event means less.”

Kris Nelson, the new artistic director and chief executive of the festival, says the conversation with Tiger began last year. “We were looking for more funds to support the work, to present art, to be able to fulfil our programming ambitions, because we can’t expect to only rely on box office and the Arts Council. The Arts Council is a huge funder of ours and they’re a really important part of what we do, as is the city. Box office is about a third of what we do, but if we want to keep our tickets low we have to go somewhere else.

“It’s not just about money; it’s also about the relationship. Because we feel like we found the right partner. I know they value our view on experimental work and what we do around bringing an audience together around really wild and really great nights out in the theatre or the comedy club or the dance space or concert hall. Because they value that, we can do what we want while they support us.”

Nelson, who is Canadian, has a different perspective on controversial sponsorship of the arts.

“It’s really up to every organisation,” he says. “What is the local context? What is the spirit of the organisation? What seem to be the ideals behind the corporation? For example, in Alberta there are a lot of oil companies that sponsor the arts. And it’s controversial there. But oil has built Alberta. You can’t get around the fact that Calgary is a boom city, and the prime minister of Canada is from Calgary. Alberta is the oil capital of the country and is driving the economy of the country. I guess people talk about it there as: does that make what they do to the environment better? Is that the trade-off?”

Nelson references the Sydney Biennale controversy earlier this year as an example of when sponsorship goes bad. Transfield Holdings, which sponsored the festival, had a 12 per cent share in Transfield Services, which supplies services to immigrant detention centres on Nauru and Manus Island.

“Ireland has an interesting mix where I feel like there isn’t actually cynicism about what a title sponsor could do, or what sponsorship could do,” says Nelson. “There’s a certain understanding that a business or a firm or a corporation can play along and be part of something. In other cultures it’s not the same way; there would be an expectation that the government would foot the bill for everything. I think there’s enough entrepreneurialism alive in the social sphere in Ireland that that’s ‘fair play’ in a sense, because there is an economic limitation – but rarely a limitation on ambition for the artists or for us as programmers.”