As one of this generation’s finest songwriters, SZA’s emotional intelligence is her weapon 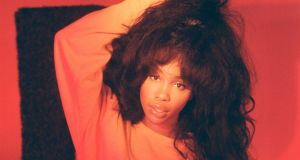 SZA: one of this generation’s finest singers

“Why is it so hard to accept the party is over? You came with your new friends and her mom jeans and her new Vans and she’s perfect and I hate it. Oh! So glad you made it.” Dripping with defensive sarcasm, SZA’s song Drew Barrymore pinpoints the pain that comes with watching an ex move on when you’d rather hold a grudge for a little longer.

On the R&B singer’s debut album, Ctrl, which was released last year, she illustrates the insecurities of being a young woman, while coming across as knowing and self-assured. With songs that speak to your heart as much as your ear, SZA turns relatability into an earworm. Her choruses cause goosebumps and her lyrics take the wind right out of your chest, and with that full-body attack it’s time to announce SZA as this week’s VBF.

SZA, who was born Solána Imani Rowe in St Louis, Missouri, has long been honing her craft as a songwriter and performer. She has three critically acclaimed EPs to her name, See.SZA.Run (2012), S (2013) and Z (2014), and songwriting credits on Beyoncé and Nicki Minaj’s Feeling Myself and Rihanna’s Consideration, which she also sings on.

She is a confessional songwriter, with songs such as Supermodel acting out a real-life narrative. On the Pharrell Williams-produced track, she calls out a boyfriend for dumping her on Valentine’s Day and, as revenge, she uses her very public platform to let him know she slept with his best friend. Revenge is a dish best served alongside massive, worldwide success.

By inserting her own personal life into her music, SZA captures the complexities of being an independent woman who goes on to find her worth, despite poor choices in partners and the negativity they so desperately want to impart. In using repetition in her lyrics, songs such as Anything could be taken from your inner monologue when you’re caught up in a crush that, for all its ferocity, feels one-sided; and Normal Girl taps into the self-doubt that festers from wanting you to be someone you’re not.

For most of this year, SZA’s name has found a place in the charts as a guest vocalist. In January she joined longtime collaborator and friend Kendrick Lamar on All the Stars, the lead single from Black Panther: The Album, which Lamar curated, and she worked with Maroon 5 on their single What Lovers Do. As she continues to build up steam as an artist, she leaves swooning fans and critics in her wake. She is one of this generation’s finest singers, her emotional intelligence and sharp eye the main factors behind her appeal.

SZA will be perform to a crowd of devoted fans – mostly women – at Longitude this weekend, roaring every single lyric like it has been lifted out of their own personal diaries.