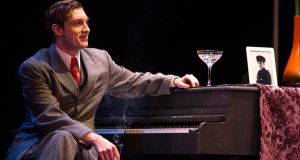 
Long before the flashbulbs begin to pop in Annabelle Comyn’s immensely considered new production of Noël Coward’s 1924 play, life among London’s bohemian elite looks like a series of poses. “You wouldn’t be so beautifully preserved if you’d wasted any of your valuable time on sincerity,” one character tells another, almost approvingly, and the precious Pawnie might stand for the society as a whole.

Pawnie, played by Mark O’Regan, wears a plaid suit and a look of casual disdain. His wit is lacerating: “Poor Clara,” he mewls after the excellent Rebecca O’Mara, “she eternally labours under the delusion that she really matters.”

The idea that Florence Lancaster (Susannah Harker), an ageing socialite, occupies a poisonous social circle extends to the geometry of Paul O’Mahony’s set. A round art-deco space, its beauty seems to spin unhappiness inwards, while people even award each other scores (“10 for stupidity”) as though they were judges in a Winter Olympics of cruelty.

Into this comes Florence’s composer son, Nicky. In a commanding performance, Rory Fleck Byrne combines clean-cut charm with volatility, and the production’s most riveting, unsettling sequence has him dancing the Charleston at the speed of a hummingbird. The shock of the original was Nicky’s cocaine addiction and suggested homosexuality, but Comyn brings a different jolt to Coward, following a thread of gossamer comedies at the Gate with a seriousness of purpose.

Even the witticisms here are rarely played for laughs: they prop up the group, and by restraining the pace, Comyn asks us to look deeper. Chahine Yavroyan’s lights and Philip Stewart’s sound design also disturb the handsome surfaces, while Peter O’Brien’s costumes are airily beautiful.

Coward, an unwavering reactionary, drives towards a moralising confrontation between mother and son, but Comyn tries to preserve a better balance. She is aided by the wonderful Fiona Bell as Helen, the conscience of the play, but Harker has a harder time with Florence, never convinced by her own self-regard, so brittle there’s not much character left to break.

This is the first production of The Vortex in Ireland, which is revealing. Through the boom, we watched Coward’s couples tiptoe away from comic farrago; now we watch two people crumple into one another in a society on the brink of collapse. That may sound like a downward spiral, but in this brave, absorbing staging, it feels like progress. Until March 17