Fregoli chase one performance style with another, but when it settles, it’s an intriguing character study 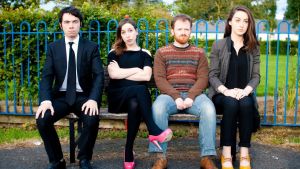 Imagine The Big Chill performed by the Millennials of small town Ireland. Give it the vigour of more than a decade’s worth of monologue plays, strain it through the ludic nostalgia of Pat McCabe and garnish with humane wit. That, near enough, is the sensation of Fregoli’s play, written by Jarlath Tivnan and directed by Maria Tivnan, a deliberately divided new work that chases one performance style with another.

Following the suicide of their friend David, four twenty-somethings act out during his funeral, each within a separate bubble of self-involvement. There is his jilted childhood friend Evan (Jarlath Tivnan), sour before his time, further put out by “Bog Standard” Brendan (Peter Shine), a gauche young farmer who brays his grief through the church. Both are watched by a profoundly hung-over, professionally bitter shop-girl, Linsey (Kate Murray), still wounded by her family’s decline in fortunes. And lastly there is Aisling (Eilish McCarthy), a London-based actress and David’s ex-girlfriend, who eclipses the others by vomiting on the alter during the eulogy.

The play delivers this all to us in interspersing monologues, enlivened by the physical brio of the ensemble - Children’s wrestling manoeuvres on bales of silage, old crones hassling a distracted Linsey for coleslaw - with the sort of jittery energy of a company that would rather be anything but boring.

That uniform high-pitch creates a din that can be hard to take, though, and it’s some relief, when the performance settles, to discover Brendan’s sustaining affection for Riverdance taken semi-seriously, or a second-act slalom into dialogue-driven naturalism.

These two acts can feel like separate (at times separable) plays, but together they give an unusually thorough study of character. The cast are accomplished at showing these neurotic private selves thawing finally through interaction. It’s also a considered idea to lead an infantilised generation back to the playground, fleetly rendered in Joss Clarke’s design, which becomes an unforced emblem for the arrested development of the community: once buoyed by the Celtic Tiger, it is now losing its youth to emigration or, most tragically, depression.

Tivnan’s play, directed with an engagingly light touch, is finally more optimistic than you might expect (or, in places, accept), but it sketches the damages and potential within this generation with unshowy, vivid insights. These are characters struggling to put away childish things, but still yearning to play, and on some level it knows that life beyond the Pleasure Ground may not be so different: it’s all swings and roundabouts.