Review: How Many Miles to Babylon?

The Lyric’s handsome new prodution of Jennifer Johnston’s first World War drama moves from the war at home to the Western Front. Which conflict is worse? 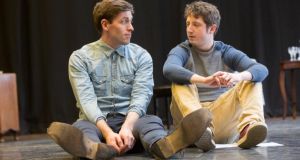 Anthony Delaney (Alec) and Ryan McParland (Jerry) in How Many Miles to Babylon?

How Many Miles to Babylon?

There are just two deaths described in Jennifer Johnston’s 1974 novella, set during the outbreak of the first World War, yet it remains a depiction of devastation.

In many ways, it is a tragedy of obedience: Alec, the isolated only-child in an Anglo-Irish big house, is a pawn in his parent’s pathological relationship, forming a forbidden friendship with a local boy Jerry, and sent finally to the front at his mother’s insistence. “Oh, you’ll go my boy,” his fatalist father (Michael James Ford) tells him. “You’re a coward, so you’ll go.”

If blind duty will lead a man to fight for “a cause I neither understand nor care about”, it’s curious that Alan Stanford’s 2005 stage adaptation should itself remain so unswervingly faithful to the book, retaining its narrator, dialogue, structure and chronology, as though, like the protagonist, it is shy to define itself.

Director Philip Wilson’s handsome production for the Lyric realises the performance as a memory play, recalled by Anthony Delaney’s genteel and haunted Alec. Delaney’s understated performance solves a number of demands. Asked to transition from hollowed nihilist to a boy at a lake, he avoids youthful caricature and instead suggests someone who has barely been allowed a childhood. It also helps that his voice is a supple instrument, clear and unwavering but laden with emotion, which lessons the clunkiness of much of his narration.

“She was difficult to talk to always,” he says of Catherine Cusack’s airily manipulative mother, Alicia, whose performance already makes that abundantly clear. As Jerry – lively, adenoidal and a proto-Republican – Ryan McParland carries his streak of subordination to the Somme. In one darkly comic moment, he turns a stern salute into a throat-slicing gesture, knowing long before his officers that this war is suicide.

Too evenly divided between the big house and the trenches, the narrative pace still suffers onstage (how many minutes to the battlefield, you wonder?) and although the ensemble is impeccable, Wilson’s production finds it difficult to convey the upheaval of the front.

Using an admirably unfussy revolving wooden stage, Mike Britton’s set moves briskly and beautifully around the house, later evoking the conflagration in jagged and twisted floorboards: a sly feat of domestic violence. The play’s greatest insight, though, is the sheer inertia of the war: the waiting, the rotting, the lure of desertion. Here, it is Jeremy Lloyd’s amiable Bennett who airs the most seditious ideas about life as “performing dogs” and the “unreality” of home. Finally, Jerry and Alec discover a genuine sense of duty, but it is something more raw than a mannerly production can emulate; something worth dying for.

Finding the Way Back: A career-best performance from Ben Affleck
9