R.U.R. review: May the robots rise up to meet you

To hell with humans; we’re on the terminators’ side, in NYT’s reboot of Karel Capek’s 1921 play 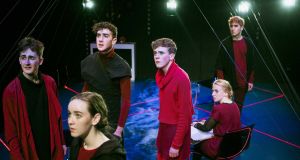 The anxiety about the slave revolt of artificial life began much earlier, though, with our very first introduction to robotic life. In 1921, the Czech playwright Karel Capek applied the word “robota” (with connotations of labour and slavery) to the ideal product of a capitalist age, an artificial person with no purpose or desire for anything but work.

That idea already seems dubious when Helen Glory (Maria Lee), daughter of the president of Rossum’s Universal Robots, comes to visit its head office on a distant island, conceived in National Youth Theatre’s considered production as a stage that cleaves the audience on either side into suspicious camps: us and them.

Helen is an early champion of robot rights, agitating for recognition of their souls (or their manufacture), while the plant manager, Harry Domin (Elliot Nolan) orates officiously about their efficiency, unsaddled by human need or a time-wasting childhood.

Helen is not persuaded, either by Harry or the company board, but consents to marry him, before the play lurches forward 10 years towards humanity’s last stand, bivouacked on the island. National Youth Theatre’s production, a model of focus and design, is by no means the first to make you root heavily for the robots, in this war between the leisure-addled, profit-hungry bourgeoisie and the toiling, suffering proletariat.

Directed as an intriguing circuitry of motion by Caitríona McLaughlin and given a fussy futuristic feel by designer Kate Moylan, the staging attaches our sympathies firmly to the mechanoids. That is partly because they themselves are often attached, by the neck, to a glowing overhanging structure that recalls both a charging dock and an upgraded form of shackle.

Working with movement director Sue Mythen to create an artful artificiality, the eight robots swivel and judder, communicating without nuance in an utterly denatured voice. Alas, so does Capek’s play. With its perfunctory plotting and several torpid monologues, it seems ahead of its time in concept alone, more ripe now for revision than reverence.

Perhaps that’s why Niamh Lunny’s costumes – all jumpsuits, tunics and turtle-necks – seem to convey nostalgia for earlier visions of the future, while the sinister patter of those Facebook robots is here included as a sly reference to a new generation’s technological concerns. That isn’t that the robots will rise up and take over, but that life and expression have become so digital as to make us inseparable from machines: You I everything else…..