John Hurt: ‘I don’t really look like Beckett at all. God. I should be so lucky’

The veteran actor returns to Dublin to perform ‘Krapp’s Last Tape’, in a role he has been developing for more than a decade 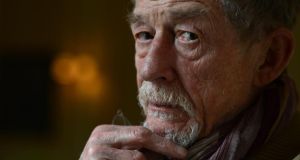 Unfazed: John Hurt says he’s not concerned by the mention of the great Krapps who have preceded him, such as Patrick Magee, Harold Pinter and Michael Gambon. Photograph: Cyril Byrne 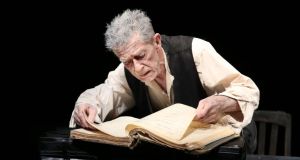 Breakfast interviews often turn out to be a bad idea. You can easily end up with a recorded interview that you can’t really hear because it’s full of clanking spoons and background music, and either one or both of you hasn’t fully woken up yet.

But when they said would you like to have breakfast with John Hurt, I forgot about all that. Who’s going to pass up the chance to share a rack of toast with the man who has provided some of your favourite cinema moments? That heartbreaking face finally uncovered near the end of The Elephant Man . Max the heroin addict offering world-weary counsel to the hapless Billy in Midnight Express . And that fantastic scene in Alien when the Thing wriggles, bleeding and toothy, out of Hurt’s chest.

Hurt is in town to play the shambolic hero in Samuel Beckett’s one-man play Krapp’s Last Tape at the Gate Theatre, a role with which he has been associated for 14 years and for which he has earned critical praise.

“I was living in Wicklow when Michael Colgan first asked me to do it,” he says, referring to the theatre’s director. “He came up to the Roundwood Inn. It was, shall we say, holiday time. And I wasn’t exactly sober. I said, ‘Let me think about it.’ Of course I put it off. I was always a bit worried about Beckett. I thought I didn’t know enough about it and that you had to be a bit of an intellectual to take it on. And I wasn’t scoring myself as such. In the end I said yes.

“Six months later Michael asked me again. I said, ‘Michael, I said I’d do it.’ And he said, ‘I know, but you were drunk at the time.’ I said, ‘Well, I’m telling you now, and I’m drunk now.’ Eventually we all sobered up and put it on.”

The production – sometimes directed by Colgan, sometimes not – has since played at the Barbican and in the West End of London, as well as touring to Washington, New York and Los Angeles.

“I think – I hope – it’s a better production now than it was to begin with,” Hurt says of the current incarnation, which opens at the Gate next week. “I’m hugely fond of the play, and I’m always amazed that it reaches half as far as it does. It seems to have its own kind of magic. In fact, I get worried talking about it, because I think, Maybe it’s like stardust and it will all disappear.”

Beckett being Beckett, there’s very little there to begin with. The sparsest of stagings – just Krapp and his tape recorder and those precious spools of tape, really – and the minimum of dialogue. “Yes. He takes absolutely everything away. And we keep taking more and more away, as the years go by.”

Hurt is unfazed by the mention of the great Krapps who have preceded him, such as Harold Pinter, Michael Gambon and Patrick Magee (for whom Beckett wrote the play). There’s no such thing as a definitive performance in the theatre, he says – otherwise, what would be point of going to see new productions? On the other hand, no good can come of straining to be different just for the sake of it.

“I would say, for instance, that Dame Edith Evans was definitive in the role of Lady Bracknell in The Importance of Being Earnest . Many people have tried to play it differently and have fallen, I think, well short – because there is a cadence. And if you don’t follow that musical cadence, it won’t work.”

One new thing Hurt does bring to Krapp, though, is that he actually looks a bit like Beckett. Or is that just accidental? “I do contrive to,” he says. “When my hair is white and it’s short like this, it’s very similar to his cut and so on. Let’s say I can give that impression. I mean, I don’t really look like Beckett at all. God. I should be so lucky.”

As food is ferried discreetly to and from our table in a quiet corner of a hotel breakfast room – Hurt has a plate of fresh fruit followed by two boiled eggs – we chat about the developments that may one day render Krapp and his tapes technologically, if not emotionally, obsolete.

“Think of printing, which eliminated writing,” Hurt offers. Before that again, writing was regarded as such a threat to memory and the oral tradition. And now . . . he pats his pocket. Mobile phones remember everything for us.

At 73, Hurt says he has never had a problem remembering lines. “But I’m terrible with names. This is what makes me feel old. I hate it. I find myself saying, ‘Who’s that?’ And my wife says, ‘Well, it’s so-and-so. You saw them at such-and-such.’ And I don’t remember. Frightening.”

Is he shy at all? Would that be why people sometimes don’t register? “I can be,” he says doubtfully. “Oh, but I can be bombastic as well. I’m horrible sometimes.”

His peers would beg to differ. At the 2012 Bafta awards, when he was given a lifetime-achievement award, the applause, warm and genuine, went on and on. Was it wonderful? Embarrassing? “More baffling than embarrassing,” he says.

Looking back on a career in which he has played Caligula in the miniseries I, Claudius , Jesus in Mel Brooks ’s irreverent A History of the World Part One , Control in the recent Tinker, Tailor, Soldier, Spy and the wonderful Jellon Lamb in the Australian film The Proposition – as well as creating the voices for a profusion of small-screen classics, from Human Planet to The Gruffalo’s Child – clearly doesn’t strike him as disturbing or threatening.

“Well, I’m so much more in the know about things that I’ve done than other people,” he says. “That’s one of the things when you get an award like that. You think, Do you know how conceited I was at this particular period of my life? Nobody’s life is all saintly. You’re such a mixture of stuff.”

Mention of saintliness prompts me to ask about the influence of his father, an Anglican vicar, on his life. “I was brought up as an Anglican, but I went to a boarding school which was so high church that it made Rome look positively puritanical,” he says. “The Mass was in Latin, we had the sacrament in the tabernacle on the altar, the whole bit. So I don’t think my prep-school upbringing was any different from that of my Catholic friends, who went through the same sort of thing – including the same sort of abuse, and all of that.”

In the autumn of 2010 Hurt spoke out about the sexual abuse to which he and other boys were subjected at their boarding school in the Kent countryside. “It never really worried me very much,” he says. “But I have to be careful what I say. Things can be so misconstrued nowadays, as if you’re defending what happened. I’m not defending it. It was just the way things were, and I knew no other way. I just let things happen, really; things that shouldn’t have happened. No question about that. What I would say is that it didn’t seem to worry me as much as it worried a lot of other boys in the school.”

The happiness of his home life is what Hurt chooses to remember. “My brother was a terrific brother. He is seven years older than me, and we used to have a game called Town, which we played all the time. We had Dinky toys, and he built houses; there was a whole life going on there, with different people in it. All day long we would play.”

The brother, now known as Anselm, has been a Benedictine monk at Glenstal Abbey for many years. “I brought him to Tangier for his 80th birthday. I was making a film there for Jim Jarmusch. We had a fantastic celebration.”

There was also a sister, Monica, who died from dementia some years ago. “God, was it cruel. Horrible.”

Having come through all these life experience, has Hurt come to any philosophical conclusions of his own? He describes himself as an atheist, the kind who asks questions rather than the kind who claims to know all the answers.

“It’s what humanity has done throughout its existence, isn’t it? But the subject has fascinated me hugely. All our art, throughout the centuries. All for different gods and different understandings. There’s so much in religion which is constructive and so much which is destructive, and they seem to go hand in hand. I don’t understand that, frankly. I just pick up the threads in what I do and how I live. But it ain’t no rock, that’s for sure. It’s a shifting sand all the time.

“One never feels completely secure. Of course, security is, to an actor, an odd thing to try to pursue.”

A smiling waiter refreshes our cups. More toast is offered. We refuse. We sigh, full and happy. “If we were on holidays,” Hurt says, “we could have kippers and all sorts. Maybe next time we will.”