The Seagull review: Chekhov feels at home in Ireland 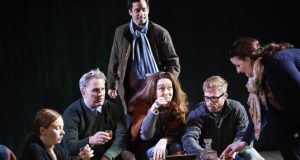 The Seagull gathers an excellent ensemble

The characters in The Seagull have always had an uneasy relationship with the future. The tortured playwright at its centre reaches for it through experimental art; his mother, the celebrated, cosseted actress, hopes to stay young by refusing to even contemplate it; and by the time a dizzy, contested muse has been hollowed out, few people can even imagine one.

Now that they have been transported 100 years in time in Corn Exchange’s lively new version, further transposed to contemporary Ireland, writers Michael West and Annie Ryan find that the future, while no more promising, seems to suit them.

Perhaps that’s because, as the iridescent backdrop of Paul O’Mahony’s gently entrancing set suggests, they all seem to be living in an artwork, neither dated nor fading. While the young writer seeks out “new forms” in theatre (here fumbling through a play-within-the-play that uses headphones – as if!), this version makes its own modest innovations, recasting Konstantin as Constance (Jane McGrath): a portrait of Chekhov’s artist as a young woman.

That makes tangled desires among the characters more complex, but the more striking result is that, unfussily and refreshingly, it provides a female protagonist with greater agency. Yet among an excellent ensemble, other roles strike you with deeper consideration. There are no supporting characters in Chekhov; each is an independent, often oblivious, universe of desire and concern. If that means that Stephen Brennan’s comically doddery Sorin, Louis Lovett’s archly pompous doctor, or even Derbhle Crotty’s magnetic, wickedly funny Arkadina occasionally seem to inhabit different plays, it’s because, as director Ryan recognises, in their heads they really do.

We meet several artists, but everyone here is a critic, and they share their perspectives liberally. Making a welcome return, Rory Keenan creates a wonderfully neurotic Trigorin, too busy filching from life to actually live it. A luminescent Crotty makes Arkadina’s existence charmingly indistinguishable from a performance: spiralling through emotions, nestled in manipulations or delusions.

McGrath’s broody Constance and Genevieve Hulme-Beaman’s flighty Nina might go either way, but, as sullen and distrait as when they started, neither persuasively conveys the gravity of the play’s later moments. Even with Chekhov’s flair for anti-climax, that’s a pity, but the gap between experience and its depiction is the play’s tragedy, here wittily and poignantly realised. In love, in life and in art, it’s all an act.