The Last Hotel review: An opera about rehearsing for death 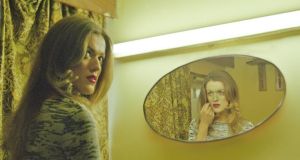 The Last Hotel: Claudia Boyle as the elegant Irish woman

It seems like an innocuous question, asked by a chatty Irish woman of a hesitant English couple who have arrived to Ireland by ferry: “Was it a nice crossing?” But in Donnacha Dennehy and Enda Walsh’s darkly absorbing new opera, it becomes something more freighted. “Well, it was a bit choppy,” offers the husband, “but painless enough, all right.” From this point on, the crossing will be choppier and hardly painless.

Inspired by the grim, true story of an Irish woman’s assisted suicide in 2002, but radically transformed, Dennehy’s score and Walsh’s libretto provide a work of wide imagination, unsettling meditation and archly quotidian detail.

Here, a man who has agreed to kill a loose acquaintance might first rhapsodise about the pleasures of a buffet lunch, or later vent frustrations through a violent burst of karaoke. Just as jarringly, the whinnying strings and jittery rhythms of the excellent Crash Ensemble performers absorb phrases of elevator muzak, RTÉ weather reports, or cede entirely to a queasy disco of Louis Walsh hits. In matters of life and death, it seems, everything becomes an absurd collision.

To fold such banal realities of life into more otherworldly considerations about death is the high-wire act of this co-production between Landmark and Wide Open Opera. Under Walsh’s direction it often feels like the forging of a modern myth, where Dennehy’s music, following the jittery structures of contemporary composition without shunning tonality, makes it an agitated and seductive experience.

Beginning in utter silence (where Mikel Murfi’s mute Caretaker scales Jamie Vartan’s sparse set like Quasimodo in charge of a two-star hotel), Claudia Boyle’s elegant Irish woman, Robin Adams’s jumpy husband and Katherine Manley’s sullen wife, are finally plunged into a distracted whorl of flute and string lines over heaving rhythms. In this fading hotel by the sea, it seems, they too will be swept away by forces greater than themselves.

That, Walsh implies, goes for us all; as true of the pensioners in the carvery with only “death to look forward to”, as it is for each character’s desires. Boyle’s PR woman, harried or suffocated by her family, sings of being “at the centre of all things”, an apparently joyless place.

A transformative figure, she coaxes out Manley’s confessions of a loveless suburban existence – another kind of slow death – while Adams’s character will put his blood money (in his mind heroically) towards building a dismal home extension. Is anyone here truly alive?

Opera gives these unremarkable, ambiguous figures a towering dimension that eludes them in life. In Dennehy’s climactic moments the music embraces them, cathartic in its abrasive rhythms, but meeting their anguished song.

Death here is an assisted act – something literally rehearsed by the trio in one shivering scene. More sly and unnerving, though, are the ways Dennehy and Walsh make death apparent in trivial conversation, banal ambitions, fading desires, even disappointing lunches. The hotel may be dismal, Murfi’s onlooker seems to know, but it does have the grandeur of finality, a big finish that puts shape on life. Until August 12th

The books quiz: Zadie Smith is married to which Irish writer?
7

Patrick Freyne: You endearingly sentimental sociopath, I’ve just the show for you!
9