The Importance of Nothing review: Oscar Wilde absorbed and radically repurposed

Wilde had to be discreet with his double meanings - In Pan Pan’s arch and fractured riff on his life and work, they try to have him both ways 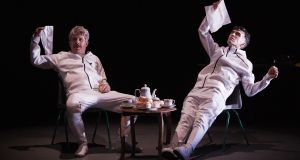 Inmates out: Andrew Bennett and Mark O’Halloran in The Importance of Nothing

The Importance of Nothing  ★★★
Project Arts Centre, Dublin

All art is quite useless, Oscar Wilde famously declared, so he should be amused to find his life’s work here put to very specific use. We are in a sparse, modern prison where haughty drama therapist Lady Lancing (Una McKevitt) has come to hold anti-homophobia workshops with three inmates – at least two of whom are gay.

The prisoners are encouraged to explore Wilde’s writings, take them apart, consider the circumstances behind their making and reception, add personal comments, and finally put everything back together for an experimental performance. It’s a teasingly familiar method, one that suggests Lady Lancing would feel right at home working with Pan Pan Theatre Company.

Adding Wilde to the list of canonical authors that Pan Pan have absorbed and radically repurposed, director Gavin Quinn and the ensemble employ a rigorous and wide-ranging understanding of their subject in order to fracture him in so many disarming ways.

We begin with a misty prologue on sexual identity and doubling, first with an affectionate conversation between actors Andrew Bennett and Mark O’Halloran about growing up gay in Ireland, then an excerpt from one of Wilde’s fairy tales, hauntingly delivered by Bennett, in which a dwarf is horrified by his mirror image. For Wilde, reflecting life in art was similarly distorted: dazzling, artificial and densely coded. Pan Pan’s aesthetic is rougher, of course, but finds some artful correspondences.

Dylan Tighe’s Gerald, a hostile sceptic, complains that all Wilde’s characters are ciphers, and Quinn’s production seems to agree, mostly feeding the actors their lines through earphones, only loosely in sync, while Judith Roddy plays a silent, watchful guard. Performing Wilde becomes its own form of imprisonment.

Cool, cerebral points
These can feel like cool, cerebral points to decipher, distilled and served very dry. McKevitt’s character, for instance, is inspired by a veiled homosexual reference in The Importance of Being Earnest, here made explicit, while claiming to be a descendent of Wilde’s poisonous lover Bosie Douglas, now keen to make amends.

Any understanding of Wilde, though, must include the direct tragedy of a man who lived for beauty and died in squalor. That’s why we end, almost shamed, with the exquisite sorrow of De Profundis, delivered with fewer devices: “Pain, unlike pleasure, wears no mask.”

- The Importance of Nothing continues at the Project Arts Centre, Dublin, until Saturday November 19th