The drama and debacle of the Sallins train robbery

Musician Cormac Breatnach’s brother was wrongly convicted of the 1976 Sallins Mail Train Robbery at the behest of a cohort within the Garda. Now he hopes a new theatre show will cast light on the injustice 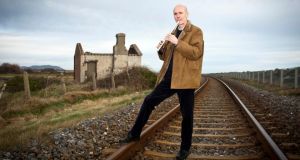 Cormac Breatnach, “I went from a situation of being relatively innocent to feeling under siege.” Photograph: Garry O’Neill

Cormac Breatnach has the long, slender fingers of a flute player. He is a tall, mild mannered and soft spoken man; a thoughtful artist with a gentle disposition.

In the not-too-distant future, you may see him on stage playing a 13-year-old child, curled up in a foetal position in the centre of a darkened set, a single light illuminating him. Around him, there is likely to be a train track, on which a lone engine chugs in the silence.

At the back of the stage, a large image of a train robbery will loom out of the darkness – a representation of the Sallins Mail Train Robbery of March 1976.

The above scenario is a work-in-progress. The Whistleblower is Cormac Breatnach’s working title for the stage presentation he is developing with director Raymond Keane. It will be a journey into the impact on him of one of the most serious miscarriages of justice in recent Irish history.

The mail train robbery, and what followed it, engulfed Breatnach’s family. For the boy barely into his teens, it was a drama that scarred him and cast a long shadow into his adulthood.

The Whistleblower will be something of an exorcism for Breatnach. He hopes it will also pose some awkward questions for the rest of society. The title is a triple allusion: to trains and the robbery, of course; but also to Breatnach’s musical instrument, the low whistle; and to his wish to alert people to something he believes requires their attention.

The late 1970s was a black period in Irish law enforcement and judicial history, one that severely damaged the reputation of An Garda Síochána. An investigation by Amnesty International, which probed 28 cases between April 1976 and May 1977, concluded that people had been ill-treated while in police custody.

The abuses ranged from pushing and shoving to severe beatings, and food and water deprivation.

Amnesty concluded also that the source of the abuse was a core group of gardaí from the Central Detective Unit in Dublin, widely referred to – inside and outside the force – as the Heavy Gang, whose activities were first exposed in this newspaper.

Political activist “Art and music and politics were the three main things we had growing up,” says Breatnach, now 52, and sitting at ease in the stylishly designed and neatly maintained Wicklow cottage he shares with his wife, Ger.

Growing up was done in Monkstown, Co Dublin, in the home of his parents, Deasún and Lucy Breatnach. His father was a writer, journalist, Irish language enthusiast, nationalist and socialist, and was well known for speaking his mind. His mother, who was equally anti-authoritarian, was from the Basque country in northern Spain. Her bilingual background (Spanish and German) found an echo in their home where Irish, Castilian-Spanish and English were spoken with equal felicity as the children grew up.

The home background, recalls Cormac, was “always questioning – questioning what you get from the TV and media.” The children conformed to their parents’ rebellious outlook, and were generally sceptical of authority. Of the eldest five, Diarmuid became a social worker, and developed an interest in Marxism-Leninism; Caoilte is a Clare-based writer and translator; Oisín is an accomplished painter; Lucilita is a former general secretary of Sinn Féin and close associate of the Adams leadership; and Osgur joined the Irish Republican Socialist Party (IRSP).

It was what happened to Osgur – his arrest, imprisonment and wrongful conviction for the train robbery – that turned the family into a campaign machine engulfing Cormac’s teens and young adulthood.

On March 31st, 1976, the Cork to Dublin mail train was robbed near Sallins in Co Kildare, with about £200,000 stolen. Five IRSP members were arrested: Osgur Breatnach, Nicky Kelly, Brian McNally, Michael Plunkett and John Fitzpatrick. During interrogation by the Garda, all except Plunkett signed alleged confessions, and all displayed injuries they claimed were inflicted by gardaí.

Breatnach recalls hearing of the arrest of his brother while at a family get-together. He remembers also soon after – “I think it was April 5th” – another phone call to the house with the news that Osgur had been assaulted while in custody.

He remembers a Garda superintendent telling one of his best pals at Coláiste Eoin in Mount Merrion to stay away from him; the neighbour who refused to spy on the family, as requested by a garda, and who instead alerted them; and the impact Osgur’s conviction had on his mother.

“The first emotional sign that I observed my mother showing, and obviously she was trying to be strong for all of us, was when we were waiting for the black Maria to leave the Special Criminal Court, Osgur in it, just after he was sentenced in December 1978.

“I ran out to stop it and I remember feeling just so enraged and powerful. I felt like superhuman, and the cops, to be fair to them, there were two young cops, they held me back and didn’t over use their power on me. But I immediately turned around and I saw my mother just kind of sobbing uncontrollably on a car bonnet with her daughter-in-law, Osgur’s wife [Irene], looking at her and so that even enraged me more.”

There followed an intense campaign, fought by the family and supporters, to highlight the lack of credible evidence brought before the three-man, non-jury Special Criminal Court, resulting in the conviction of Osgur Breatnach and his co-accused, Brian McNally and Nicky Kelly. Breatnach received a 12-year sentence, as did Kelly (who had jumped bail and fled to America). McNally got nine years.

The unfortunate O’Connor – elderly and evidently unwell, who would nod off and jerk awake again day after day – was defended by his colleagues on the bench when defence lawyers tried to get the trial halted.

“If you were to take one story from the whole case,” says Breatnach, “that for me speaks volumes. You had something like nine judges rule that there was nothing wrong . . . Not only that, but those who gave evidence [during efforts to get the trial stopped], not only Osgur, Nicky and Brian, but the solicitors, a guy called Martin Reynolds who was a Fine Gael member, and journalist Niall Kiely, all saying he appeared to be asleep.

“And the Supreme Court were heavily critical of the lawyers for swearing the affidavits [that O’Connor appeared unable to discharge his judicial functions]. It was beyond my comprehension.”

It was all a steep learning curve for a boy in his teens. “I lost my innocence, really, that’s what I really lost. I went from a situation of being relatively innocent to feeling under siege . . . My whole view of society and the protection that citizens get and enjoy from the State crumbled.”

In May 1980, the Court of Criminal Appeal quashed the convictions of Osgur Breatnach and Brian McNally. In the same month, the IRA claimed responsibility for the theft. In February 1981, the court explained its reasoning: the statements made in custody – the only evidence against them – had been made involuntarily. However, the Appeal Court declined to alter a so-called finding of fact by the Special Criminal Court, to the effect that the men had beaten themselves up.

Nicky Kelly had returned from America in June 1980 but disappeared into a judicial and custodial black hole which he did not break free of until July 1984. This was because the courts ruled he must serve out the sentence, the same one just set aside for his co-convicted, because, technically, the time during which he could appeal his conviction had passed.

In 1984, justice minister Michael Noonan cut through the mess and freed him on humanitarian grounds. Kelly received a presidential pardon in 1992 and he, Breatnach and McNally settled compensation claims the following year against the State for sums understood to be between about £400,000 and £750,000.

For Cormac Breatnach the troubling effects of the saga continued, and in 2005 he underwent extensive counselling for post-traumatic stress disorder, a condition that played a major role in the breakdown of his first marriage. Breatnach says he has been struggling with the fallout of the Sallins case for what “seems forever”.

Now he is working on securing funding for the show that he hopes will prompt a wider audience – not least politicians, gardaí and members of the judiciary – to ponder the acknowledged injustice that was the Sallins Train Robbery case. cormacbreatnach.com