Taking a bow for Irish theatre 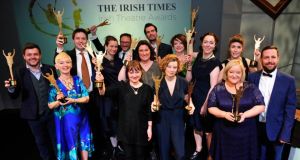 The best gear and fancy frocks at the Irish Times Irish Theatre Awards had personality and style – you wouldn’t expect less from a theatre crowd – and many of the women who won shunned stilettos for boots: a statement for the year that was in it.

The message behind that symbol was one of the three things that dominated last Sunday’s annual celebration of what is best in Irish theatre.

First was DruidShakespeare, which swept all before it by scooping five awards, from nominations in 10 categories, for the six-hour staging of Mark O’Rowe’s version of the history plays. Druid after Druid, it seemed, trooped up to collect their sculptures by the Cork artist Paddy McCormack, culminating in the entire company taking the stage to accept the award for best production. The actor Marie Mullen spoke for Garry Hynes, winner of the award for best director, who was working in New York. Derbhle Crotty, who won best actress, said that working on DruidShakespeare was unlike anything she had ever experienced, or expected to experience. Doreen McKenna and Francis O’Connor won best costume design; O’Connor was delighted that his former wardrobe-supervisor collaborator was “acknowledged for the design contribution she really makes”.

They are busy folk; as the smart, sharp and sassy presenters Sonya Kelly and Shane O’Reilly commented, the Druids were keeping the Galway-Dublin Go Bus service open.

WTF followed next. Lian Bell, the set designer who spearheaded Waking the Feminists, the campaign for gender equality in theatre, knows how to work a crowd, and her judges’ special award for leading the movement with courage and conviction got a rousing reception at the National Concert Hall, as she progressively namechecked and groupchecked – “Stand up those who spoke at one of the WTF events so far” – so that the entire auditorium was on its feet at “Everyone in the audience who is a feminist please stand up.” 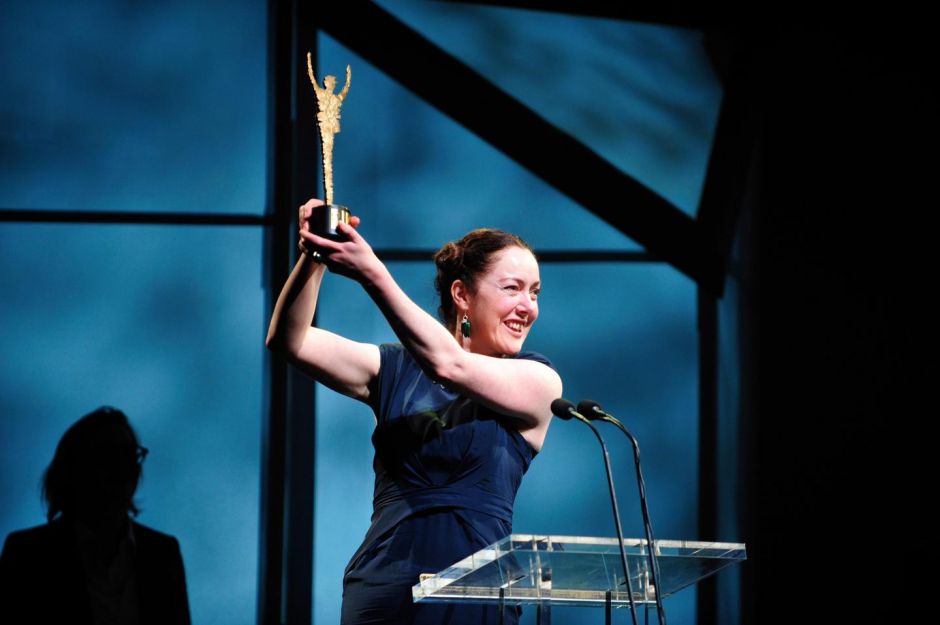 And third keynote of the evening was Anne Clarke, an acclaimed choice for the special tribute award. Loughlin Deegan of the Lir, the national academy of dramatic art, gave the citation for Clarke – “the producer’s producer” – who set up Landmark Productions in 2003. He talked about her work at the Gate Theatre – “consistently full houses, the constant international touring, the Beckett and Pinter festivals” – and of her brave decision to go it alone, until very recently as “a core team of just one, working out of the front room of her family home”.

Landmark “brilliantly balances art-led and commercial projects”, from Ross O’Carroll-Kelly’s Breaking Dad to Enda Walsh’s The Walworth Farce to collaborations such as Walsh’s Misterman, with Galway International Arts Festival, and with Wide Open Opera for the world premiere of The Last Hotel, by Donnacha Dennehy and Enda Walsh (which won best opera).

In her own speech Clarke offered some words of wisdom (some tongue in cheek) – “verbal ticks” that punctuate every day. They included: “Everything we do is planned.” “They’ll have to give me the money. (Oh no they won’t.)” “I will eat my hat if we don’t sell out.”

In accepting the best-opera award Fergus Sheil of Wide Open talked about the creative team for The Last Hotel, a mix of singers “and Mikel Murfi, who didn’t sing. It was in his contract not to sing.”

Laurence Kinlan, who was named best supporting actor for The Night Alive, said his eight-year-old called as he left that evening. “Good luck at the Oscars tonight, Dad.”

This year’s judges Róise Goan and Anna Walsh spoke also for their fellow judge Gerry Smyth, describing an exceptional year for theatre in Ireland after seeing more than 130 productions in 2015. “Traditional stories, local and international, were interrogated and adapted to find their new relevance. On the eve of a centenary Irish theatre found ways to interrogate history rather than collapse under the weight of it.”

But, commented Walsh, “2015 was a good – but certainly not a great – year for medium-sized and smaller companies, some lurching from project to project funding if they’re lucky. So the phenomenal achievements of last year do not excuse reducing the investment of public money in theatre and the arts any further. As art is a public good, then sustained investment right across theatre and the arts in the short, medium and long term is needed.”