Review: What Happens to the Hope at the End of the Evening

Two men stare down the barrel of being 50: the results are clever and sensitive 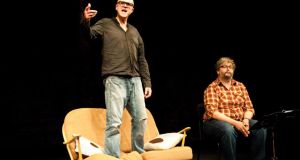 What Happens to the Hope at the End of the Evening

The old friend who turns up waving a bottle, and wants to stay up all night like the old days; the former radical settling into a middle-age that embraces Neighbourhood Watch and Baby on Board stickers. In this playful two-hander, two men approaching 50 stare at each other and wonder what has happened. Addressing each other as “mate”, the term is strained to the point of sarcasm over the course of their uncomfortable reunion.

Written and performed by English playwrights Tim Crouch and Andy Smith, the piece takes their own long-standing friendship as a starting point for a subtle portrayal of the expectations we invest in our relationships, and what we owe to others around us.

“He was waiting for his friend,” Smith’s character announces at intervals, as if he is still waiting, even though his restless friend has arrived and is crashing around his small living room. Crouch perfectly portrays the still-angry anti-fascist protestor whose life is a mess. Smith, who is not a professional actor, reads from the script, narrating stage directions as well as directly addressing the audience.

Inviting us to shake hands with our neighbour and to remove our shoes, he initially comes across as an evangelical teacher, quoting chunky academic texts about theatre. For him, theatre is about being part of a community and making connections, which all sounds lovely. But his difficulties in connecting with his irascible old pal remain an awkward antidote to idealism, and it is clear that his attitudes are hardening into intolerance.

With its in-built commentary on its own processes, this could have been an aridly self-conscious exercise. Yet the performances, directed by Karl James, are so absorbing that it succeeds in being perceptive and fresh. Despite all its irony, it celebrates the potential of an-hour long, cleverly-judged piece of theatre to provoke and sensitise us.