Review: The Playboy of the Western World 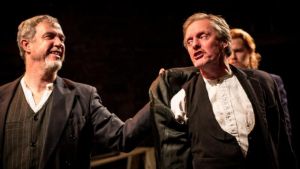 The Playboy of the Western World

A murderer is on the run, staggering towards a Mayo shebeen where nothing ever happens. This is a place so barren and wind-beaten that the low stone wall of Jamie Vartan’s ascetic set, marking the rear of the pub, seems to slouch away as though giving up. With Pegeen Mike laboriously drawing up a stock order, Blue Raincoat’s fascinating new production of JM Synge’s classic leaves everything similarly blanched and exposed. Here is a life of dismal marriage plans, joylessly alcoholic wakes and occasional eccentricities. A man who has killed his father should make for some excitement.

It may sound perverse that director Niall Henry’s stark interpretation instead keeps everything cool, but it makes the play sharper. Even John Carty’s Shawn Keogh, older and pallid, barely registers the oddity of a groaning stranger outside. When Bob Kelly enters as a guarded Christy Mahon, his interrogation is rapid and terse. It’s as though the comedy of the play has been forcibly smothered, the (over) familiar “Synge song” melody of the language flattened. Performed in an uninterrupted 90 minutes, this is a daring ‘Playboy’, swerving away from expected laughs to discover a darker, more jolting tale, elemental and strange.

It’s tempting to think that this is the result of Blue Raincoat’s recent work on Beckett, O’Brien, Ionesco and Yeats, filtering ‘Playboy’ through such layers of influence. Styled by Vartan with the authenticity of an old photograph, crisply lit by Barry McKinney and buttressed by Joe Hunt’s ominous sound design, it settles into a stark folk tale, given a contemporary interpretation.

Just look at the arresting Kelly, finally smiling at his reflection and moving spryly, as Christy imagines himself surrounded by admiring local girls – here just another of his inventions. “Them that kills their fathers is a vain lot surely,” says Fiona McGeown’s sly Widow Quinn, inheriting the line and pricking his bubble. That makes for a sleek and clarifying approach, as does Henry’s command of motion, letting bodies stalk the stage like chess pieces, then retreat to observe. Everyone becomes more attentive to what’s really going on here.

Sadly, that surveillance and suspicion also means killing the romance. Sandra O’Malley, head low and arms akimbo, is as yielding as granite, and Christy’s proclaimed passion only seems a measure of his self-regard. A “likely man”, as Peter Davey’s not-quite-dead Old Mahon calls him, this Christy becomes a social climber, advancing on self-belief and borrowed credit – a hero for our times. There’s a great gap between a gallus story and a dirty deed, as Pegeen will always decide. The achievement of this revealing production is showing how much more there is to discover in that gap.