Review | Chekhov’s First Play: ‘Platonov is the black hole at the heart of this brilliant endeavour’

Bush Moukarzel and Ben Kidd slowly strip away the trappings of form and character from Chekhov’s first work, and take a wrecking ball of theatrical convention 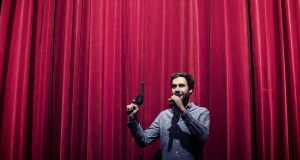 The name of this theatre company, Dead Centre, also seems spot-on for their latest production, in which Chekhov’s first play is hollowed out. Its central character, Platonov, does not utter a single word here: he is the black hole around which the whole brilliant endeavour implodes. Less of an adaptation of Chekhov than an ambush, Bush Moukarzel and Ben Kidd’s staging works from the outside in, slowly stripping away the trappings of form and character.

Frequently revisited by playwrights including Michael Frayn, David Hare and Lázló Marton, Chekhov’s untitled first play, usually called Platonov, was a raw and furious precursor of his later works. Tempting as it is to notice the echoes of Three Sisters, The Seagull, Uncle Vanya and The Cherry Orchard in this new patchwork text, the danger is that some staging detail will be missed. While we are distracted, the drunken doctor will have ordered a Chinese takeaway on his phone.

As in their previous productions, Souvenir and Lippy, Moukarzel and Kidd are fascinated by stagecraft and theatrical convention. The audience is greeted by Moukarzel in the role of the omniscient director, who gives a live commentary on the opening scene of the play, via headphones. Deliberately patronising and pleased with himself, he interrupts the cast to point out his directorial interventions – the scenes and characters he has cut from the original. It is a relief when he allows the superb ensemble cast – Annie Ryan, Rory Nolan, Dylan Tighe, Rebecca O’Mara, Liam Carney and Breffni Holohan – to inhabit their characters: a group of friends and relatives awaiting the arrival of the object of their fascination, Platonov.

From a huge wrecking ball that destroys the scenery before being set on fire, to the shedding of period costumes, the collapse of the play and the characters has an unstoppable momentum, riveting to watch. The beautiful widow stumbles through fog, taking a sledge-hammer to the walls of her mansion, while Platonov’s pregnant wife smashes, face down, on the table. Over the headphones, the director’s commentary becomes increasingly anguished. He and Platonov have swapped places: it is he who is “the superfluous man” having an existential crisis.