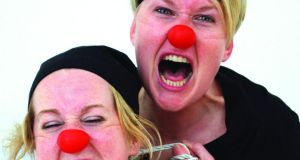 Who knows what possessed Veronica Coburn to adapt a 1930s “drama of women in the villages of Spain” by Federico García Lorca into a two-woman show performed entirely in red nose, but we’re glad she did.

“Bernarda’s House is not a children’s show,” the Fringe website warns. From its giddy girlish start, you might think otherwise. Bernarda (Clare Barrett), a playful, six-year-old, tells the audience the rearranged tiles on the floor are a “metapor” for her life – they start out pristine, before turning grubby and eventually ending up filthy and broken.

And from the carry-on of Ponsia (Amy Conroy), the family’s sexed-up servant, it’s hard to imagine this production will ever career down the grim path it eventually must take.

Coburn’s comedy brings Lorca honking into the 21st century, and Barrett’s chilling transformation into the bitter widow tells a story of repression as old as time. Meanwhile Conroy’s steady presence – comic, affectionate and energetic – is the creaking fulcrum that balances the two.