Us/Them and Burgerz take very different approaches to transforming trauma, the first through matter-of-fact playfulness, and the second through the prism of fast food 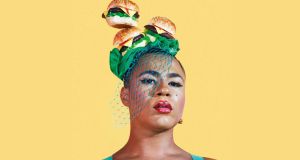 How do you explain a massacre like the 2004 Beslan school siege to children? More sobering, how would the children who survived explain it to us? It’s an unlikely subject for a piece of theatre for young audiences and families, and Belgian director Carly Wijs steps carefully into the story of the three-day siege, in which 1,200 people were taken hostage by Chechan separatists, and which ended with an explosion that killed 334 people, including 186 children. If that scale of devastation is numbing, that may explain the strangely disassociative narration of Wijs’s two school students, recreating the siege in a classroom using chalk to sketch the town, a blackboard to contain mathematical analysis of facts and figures, and a maze of string to suggest tripwires, hiding places and the prison of a sweltering gymnasium. If that sounds excessively grim, this Edinburgh Fringe hit from 2016 has been praised more for its spirit of resilience, intelligence and even playfulness, as the children not only disentangle the confusion of the event, but the prejudices and myths that led into and out from it. In hardening times abounding with atrocities, let that be a lesson too.

Just a couple of years ago the artist Travis Alabanza, who goes by the pronoun “them”, was outside walking when someone threw a hamburger at them along with a transphobic slur. So began a curious meditation, not immediately on the random act of violence, but on the weapon of choice. On stage, Alabanza enlists the audience’s help in both making and understanding a humble burger – the meat and ingredients, the bun, the container – before considering its potential velocity and, in more senses than one, its impact.

There, Alabanza’s show for Hackney Showrooms, fresh from this year’s Edinburgh Fringe, slaloms from comedic sizzling riffing into something more serious: the normalisation of marginalisation, the passivity of passersby, and, in a recurring motif, the nagging feeling of being “boxed in”. That asks the audience to consider questions of bigotry and complicity from an unanticipated perspective, not served up like a side order of fries, but as the main course.