While there is a subtlety in Tóbín’s text of this reimagined Antigone, Lisa Dwan’s stentorian performance conveys more thunder than thought 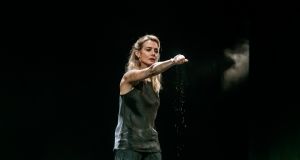 In Sophocles’s version of Antigone, the clash between state power and individual conscience begins over a body that must not be buried. Colm Tóibín’s poetic and reflective new version decides to unearth another figure, though, Antigone’s sister, Ismene.

To call Ismene a supporting character in that tragedy of decrees and defiance is almost to damn her: obedient where her sister is famously insurgent, Ismene’s role has been to counsel caution, to stay secret and silent. In Tóibín’s play, Antigone disparages her sister even as she shields her from Creon’s wrath: “She had nothing to do with this,” Antigone insists of her brother’s burial, without looking at her sister. “She did nothing.”

Seeking to share the fatal punishment of her sister, Ismene was condemned to live instead. That’s how Tóibín’s character sees herself: the guilty, dutiful survivor. “I alone can speak,” says Lisa Dwan, negotiating the angular slabs of what may be a tomb, a cave, or both. “I alone, the pale sister. The witness.”

Pale. Quiet. Dull. These are not qualities that come naturally to Dwan, the actor feted for her Beckettian solo work, who stayed in close consultation with Tóibín during the play’s writing at Columbia University. Nor do they seem like promising character notes for a protagonist elevated from the role of bystander.

But there is a subtlety in Tóibín’s text, careful in its presentation of limpid, marginalised perspectives, its depiction of brittle, petty politics, the awesome dawning of seditious thought, that seems to elude Dwan in performance. The lines reach the ear with automatic, slalom-pole emphases, almost every sentence pivoting from growl to trill, irrespective of character or circumstance.

Co-produced by the Gate and Audible, the digital spoken word platform, it makes for surprisingly grating listen, where the more intriguing evocations of light and shade come from the interplay between James F Ingalls’s illumination and Jamie Vartan’s receptive set, helpfully delineating scenes.

Is there a reason to perform something gently lyrical, and as concerned with the meaning of silence as it is with protest, as such a din? You could argue that we find Ismene already channelling her sister’s fierce spirit, at a time in which women are speaking the truth to power and patriarchy. But the stentorian delivery doesn’t convey the character’s journey from timid silence to dauntless speech, and worse, it gets in the way of the play, which, like Tóibín’s Testament, seems more eager to meet a reader than a spectator.

He imagines Ismene as a largely unnoticed figure, who is herself always noticing: attuned to the persuasion of Antigone’s rhetoric, observing the minutiae of Creon’s cruelties and vulnerabilities (“I saw something that no one else saw, I saw Creon in all his weakness”), attentive to the fickle stance of milling men. “Instead of thunder we need thought,” Antigone urges Creon, and for one tantalising moment her words are almost effective. Director Carey Perloff might have adopted that note for the production as a whole.

Why Didn’t You Just Do What You Were Told?: A superb collection
10