When Gerry Ryan confessed to killing a lamb in 1987, the hoax turned him into a household name. Did it also change the airwaves? 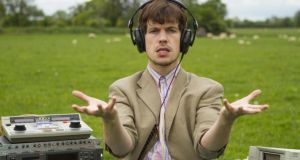 In 1987, Gerry Ryan decided to cause a stir. During an uneventful survival segment in Connemara on The Gay Byrne Show, he reported killing a lamb. It was a hoax, but the scandal turned him into a household name – just not the name he wanted.

Hugh Travers’s enjoyable and artful new play for Underscore_Productions takes what might have been a trivial footnote in Irish broadcasting and makes it something meaningful. Wisely letting Ryan do the talking, Travers subtly reveals a cultural shift, from an “outcry”-averse age to the moral ambiguity of postmodern entertainment. “I gave them what they need,” says Ryan, and it’s hard to argue.

It’s also hard to say who captures Ryan’s voice best: Travers, or Michael Ford FitzGerald, whose excellent performance holds the stage with appropriate appetite and bluster. FitzGerald’s impression of Gay Byrne is a more fiendish act of mimicry, but, better still, it evokes the schism in “public service” broadcasting. With that rift neatly apparent, one surreal swirl of Ryan’s mental chaos feels like overkill, but director Ronan Phelan wittily presents the godheads of RTÉ while slyly suggesting a new era ready to believe anything.

The Goop Lab: A deep dive into the Gwynnieverse
8