Stephen Rea, Loudon Wainwright III and Christian Blackshaw are among the highlights 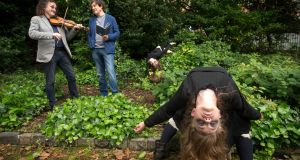 Ghosts in caves, surprises in gardens and Mozart in the Marble City are all in store at this year’s Kilkenny Arts Festival (KAF).

Festival director Eugene Downes says this year’s festival will explore the “chemistry between extraordinary artists from different parts of the world and the artistic territory coming together in these ancient buildings and gardens of the medieval city”.

The centre piece of the festival is an impressive Mozart programme. Christian Blackshaw, who found fame at the age of 64, will play the complete cycle of piano sonatas. The Irish Chamber Orchestra will be in residence for the first of three years, this time with Gábor Takács-Nagy and Jorg Widmann. Idomeneo, Mozart’s first operatic masterpiece, will be performed in full in this country for the first time since 1956. Other performers include Andras Schiff, Alina Ibragimova and the Heath Quartet.

Footsbarn Theatre will present The Incomplete Words of Shakespeare – which Downes describes as the bard meets Month Python – in a tent on John Street, along with its version of One Flew Over the Cuckoo’s Nest.

A series of surprise performances will again take place this year in gardens around the city. But perhaps the most intriguing venue is a one-off performance on August 8th in Dunmore Cave. Stephen Rea will read sections from his friend Seamus Heaney’s translation of Book VI of the Aeneid – which tells the story of Aeneas’s descent into the underworld to look for his father – with a live accompaniment by cellist Neil Martin. The show will also take place in full at the Watergate Theatre for two nights.

Other spooky goings-on include Loosysmokes’ Behind the Dark. One of the hits of the 2015 Tiger Dublin Fringe, it will take place deep in the trees of Kilkenny’s Castle Park.

This year, Martin Hayes is again involved in putting together the Marble City Sessions, which will feature Ricky Skaggs, The Unthanks, Utsav Lal, Maighread and Tríona Ní Dhomhnaill, Cleek Schrey, David Power and Iarla Ó Lionáird. He will also perform with his new quartet, featuring Doug Wieselman, Liz Knowles and Dennis Cahill. Other musical highlights include Villagers, Sam Lee and Friends, FM Belfast (who come from Iceland), and the Irish debut of US jazz pianist Justin Kauflin.

Barnstorm Theatre will celebrate its 25th anniversary with three productions for children, including a visit from UK company Shona Reppe with The Curious Scrapbook of Josephine Bean.

KAF will also continue its policy of artistic residencies. Among those making a temporary home in the Marble City will be poet Paul Muldoon, artist Mick O’Dea (building on his portraits project from last year), and musician Loudon Wainwright III, with a European premiere of his new show.

Under Downes’s directorship, the festival has each year made a major commitment to one artist, something that is not without risk. “The secret for me is to try and somehow combine these epic artistic journeys with also a sense of eclecticism so that you have the different flavours. Some are incredibly rich and deep, some are like little seasonings. It’s to get that balance between the deep dive but also all of the ephemeral and fun, and the magic of the place and the moment.”