Dogs of war, wild-goose chases, salad days: William Shakespeare, who died 400 years ago this weekend, on April 23rd, 1616, coined so many of our phrases

To commemorate the 400th anniversary of William Shakespeare's death the people of Dublin interpret the famous Hamlet soliloquy. 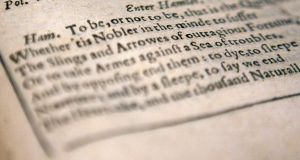 To be, or not to be?: Hamlet’s soliloquy in the first folio of William Shakespeare’s plays, from 1623. Photograph: John D McHugh/AFP/Getty

There are two competing ideas about Shakespeare’s language that most of us will encounter. The first is that it is too hard to fully understand. The second is that it is so magnificent and meaningful that it has shaped the way we speak and even think.

The first argument isn’t solely the complaint of listless school students, struggling through a syllabus of forsooths, ay marry is’ts, prithees and what means my lords? while itching for the wordless clarity of Snapchat.

Many people still confuse Juliet’s “Wherefore art thou Romeo?” with a request for his location rather than a rhetorical inquiry into why he is so called. (Many more think that this takes place on a balcony; it does not.) Clarity and poetry, though, hardly ever go together hand in glove, and the migratory habits of language and meaning, over four centuries, have further obscured much of Shakespeare’s voluminous wordplay.

So how much are we missing, and what would be a good return for our attention anyway? The totality or the gist?

Take a very familiar speech, such as Macbeth’s early tormented meditation on murdering his sovereign, and see how its words mingle the accessible with the faintly alien:

If it were done when ’tis done, then ’twere well
It was done quickly; if th’assassination
Could trammel up the consequence, and catch
With his surcease success: that but this blow
Might be the be-all and the end-all, here,
But here, upon this bank and shoal of time,
We’d jump the life to come.

If your attention snags on the image of trammelling up consequences, or the sibilant grammatical flip of success brought by Duncan’s surcease, the meaning of the line is brought home with the unimprovable pith of “the be-all and end-all”, a phrase most of us will reach for at one time or another, even outside the occasion of a regicide.

But what does it mean that “bank and shoal” appear in the folio version as “Schoole”, so the image has moved from a classroom to an island, or that “jump” here actually doubles for “risk”? Macbeth is heeding the lessons of damnation. He then moves on to consider his “poisoned chalice”, now a reassuring cliche that faces every would-be usurper and incoming football manager.

There has been recent renewed energy towards “translating” Shakespeare into “modern English” – and understandable outcry against it. The Oregon Shakespeare Festival has commissioned 39 adaptations, and many theatres have undertaken to stage them. Earlier this year the artistic director of Shakespeare’s Globe theatre, Emma Rice, was sanguine about rewording “the difficult bits” of Shakespeare as “pretty general practice”. You too, Brutus?

But comprehension of Shakespeare, like comprehension of Sophocles, Joyce or Plath, need not be absolute to be worthwhile. In performance in particular it falls to each production to convey the sense through a rigorous understanding of the text. That’s where you will still hear the first instance of all our curlicues of everyday speech: the dogs of war and method in madness; the wild-goose chases and salad days.

Even to “break the ice” and “catch a cold” were the innovations of a master stylist, so much a part of us that they seem like phrases without origin, something we have always known. What could the world have been before it was your oyster?

It’s hard to separate Shakespeare’s restless imagination from his hunger for inventive expression. He had an inordinately large vocabulary (close to 70,000 words), he coined many of them (about 3,000), and he was slow to repeat himself (31,534 unique mentions). Even Bernard Levin’s famous Quoting Shakespeare, from 1983, can’t be exhaustive: “If you have ever refused to budge an inch or suffered from green-eyed jealousy, if you have played fast and loose, if you have been tongue-tied, a tower of strength, hoodwinked or in a pickle, if you have knitted your brows, made a virtue of necessity, insisted on fair play, slept not one wink, stood on ceremony, danced attendance (on your lord and master), laughed yourself into stitches, had short shrift, cold comfort or too much of a good thing, if you have seen better days or lived in a fool’s paradise – why, be that as it may, the more fool you, for it is a foregone conclusion that you are (as good luck would have it) quoting Shakespeare.”

That sort of permanent presence in our vernacular, flowing as invisibly and usefully as fluoride through the water supply, is hard to explain away as simply a matter of custom or canon. Shakespeare put words to our most casual and critical situations. He minted the language to address inconceivable dilemmas, found a shape for our deepest woes and fullest joys, began the cliches that bail us out during small talk, found the choicest ways to woo or wound.

“Words, words, words,” says the prince when asked what he is reading. Shakespeare said it best.

Lockdown midterm guide: Get over the midweek hump