The festival of theatre-in-progress projects from new artists treats plays as lambs. But will they get slaughtered? 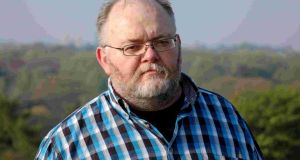 Pat McGrath: his Always Going Home is hugely enjoyable but seems unsuited to the programme

1 If you open your heart, do you get a bloody mess?

The Theatre Machine Turns You On 4, a mini-festival of short works in progress, is an opportunity for independent artists to demonstrate their ideas in a supportive environment. An immensely supportive environment. “We invite you to open your eyes and ears but most importantly to open your heart,” says a programme note by TheatreClub’s Shane Byrne. For four days, at the beginning of each performance, the amiable Byrne offered similar disclaimers in person, exhorting the bravery of the makers and the generosity of the audience, as though nascent performances would never exist without a very warm incubator.

To some extent he’s right: creative ideas are vulnerable things, susceptible to encouragement or inhibition. In five years the Theatre Machine has witnessed the first steps of several shows and careers that have helped define the shape of Irish alternative performance: Dead Centre’s Lippy, Hugh Travers’s play Lambo, Sorcha Kenny’s Dolls. But while it may not be trumpeted as part of its success, the work that goes nowhere beyond these try-outs, and even performance careers that have ended here, are no less useful. It is not enough to succeed, as Gore Vidal put it: others have to fail. To treat artists as lambs is a great policy only if you are similarly content to send them to slaughter.

2 Is everyone a comedian?

The Irish Times Irish Theatre Awards judge Gerard Smyth recently reflected, in these pages, on a year in which monologue performances with high joke-to-drama ratios had brought theatre and stand-up comedy into close alignment. He really hoped this was not a trend. The year ahead is unlikely to bring him any solace.

The evidence of Theatre Machine is that theatre makers have a growing fascination with comedy, while comedians continue to be fascinated by theatre. Two performances this year took the direct form of a stand-up gig, microphones, hard-edged spotlights, set-ups, punchlines and all. In two others a comedian and an actor sought to turn their comic ideas into shaped and structured theatre performances.

Perhaps the most worthwhile of these was Martin Sharry’s Marky McSherry Tells it Like it Is! McSharry, a theatre maker, assumes a gossamer-thin comedy persona: he turns his collar up and wanly feigns a “hey, how ya doin’?” kind of confidence. But he uses his faltering, failing routine to inject real confessional detail (he is a 36-year-old with Parkinson’s) and transforms stand-up cliches into more disconcerting philosophical inquiries. “How much time do we have left?” asks his warm-up man, and when the line comes it lands with a shiver.

Another show with real potential, Breda Larkin’s gentle comedy about Ireland, religion and feminism, just requires a dramaturg, someone to help tease out her ideas, refine the difference between persona and character, help structure her journey and explain that, in theatre, there are fleeter and funnier ways to represent driving than by clutching an actual honest-to-God steering wheel.

3 Are you really asking?

Meanwhile, at the Theatre of War Symposium across town, the Abbey Theatre’s audience was

encouraged to ask genuine questions rather than deliver incurious statements. This is a great policy for scratch nights too, where you could spot genuine trial runs from hermetically sealed concepts. Zoe Ní Riordáin’s Recovery: the Musical, for instance, was asking the right questions about grief – a recurring theme this year – and its expression in music, domestic routine and popular culture, without any glib inclinations towards providing an answer. Poet Vicky Curtis did something similar with dissimilar means – a nakedly and almost exclusively personal view – but it made no claim to being finished. Encouragingly, Curtis is a spoken-word performer who gives the impression she is still listening.

It’s also why a hugely enjoyable piece such as Pat McGrath’s Always Going Home seems unsuited to the programme. It is considered, comic, thematically coherent and well-performed, but a trailer rather than a work in progress. “Can we stretch it out to an hour?” asked McGrath’s programme note; a genuine inquiry, perhaps, but unworthy of such a platform for exploration.

4 Where do we go from here?

This also speaks to a problem facing Theatre Machine, which now has a solid track record as a feeder school for the Tiger Dublin Fringe Festival

and is one of the few games in town for early exposure among programmers and tastemakers. I’d be shocked if Always Going Home wasn’t coming to a theatre near you soon and surprised if Love+, an on-point meditation on robotic love from the outfit Claire and Darren, did not also feature (hopefully with a better title). But it would be a more encouraging sign if some of these pieces recognised a dead end when they hit it. Some fun stylistic exercises will not cohere into a show or spectacle. Some live art prototypes, overladen with instructions and self-defeating irony, are really experiments with nothing to prove.

Whether it goes somewhere or nowhere from here, a final piece, Ruairi Donovan’s Ghosts, may be the most accomplished performance of the week, not because it’s complete but because it is genuinely and sensitively searching. Beginning with a timely, bracing discussion about onstage obscenity, and referring to the historical case that broke Dublin’s Pike Theatre, Donovan and his partner teased at notions of art and offence, taking genuine exposed risks in the most disarmingly gentle ways.

Ghosts could develop in any number of directions, or remain exactly as it was. Politically alive and formally adventurous, with a clear respect for its audience, this was tuned in, turned on: everything Theatre Machine should be.