Patrick Freyne: the 12 people you will meet at Electric Picnic

Here are the 12 people you will meet at Electric Picnic. Feel free to give the wise journalist snacks 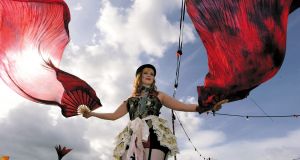 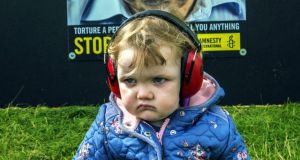 The bit of craic
The Bit of Craic shirtlessly photobombs every photograph, shouts “Wayhey!” into every microphone, heckles every comedian, sings along to every song, banters with every celebrity and gamely battles the cosmic certainty that life is meaningless and that we die alone. Godspeed, the Bit of Craic. Godspeed.

The person who knows there’s something better in the next tent (eternally)
Do not come into this damned soul’s orbit or you too will join her infinite quest. Like sailors lost in Fiddler’s Green you will roam from stage to stage, somehow missing every band you like and being forever dissatisfied.

The aging poet/economist/ literary figure who has accidentally wandered out of the Mindfield spoken word arena
Look at him in his open-necked shirt and sports coat. He is waxing lyrical. That was the problem all along, he thinks: we didn’t have enough people who could talk for an hour without a break. He will put it all in context for you – how Electric Picnic is a metaphor for post-Catholic, post capitalist Ireland and how the campsite is like a ghost estate and Pie Minister is a modern day soup kitchen and Tame Impala are like a new Bagatelle. Oh look, now he’s trying to explain Aosdána to a goth.

The person in a fancy dress costume
On Friday the person in a fancy dress costume is the life and soul of the party. Then comes the great decay. Over the next two days the costume becomes a fetid relic of a prelapsarian age. Feel the ennui. Observe how three days of stubble and red-blood-shot eyes set off a Mario Bros moustache. And what does a woman vomiting out of a worn, dirty Spongebob Squarepants costume do to your sense of childlike innocence?

The modern parent
Unlike the strict autocrats of yore, the modern parent plans to free their children’s minds from bourgeois conformity. They have done this by imprisoning them in a large internment camp for hedonists where they will be bombarded by loud noises and get to have magical adventures with drunks. Yes, it was about time that little Jack replaced his invisible friend Trixabelle, for a visible one: Martin, a 27-year-old GAA-jersey-clad alcoholic Blur fan with poor boundaries.

The sullen baby with ear protectors
This guy is a total buzzkill. Disappointment in one’s parents usually doesn’t come until teenage years. Not for the sullen baby with ear protectors. “Look at them,” he thinks with disgust as his pint-quaffing progenitors dance around his post-apocalyptic party chariot. “I am totally going to get into opera and Ayn Rand to spite them.”

The blitzed raver
From a distance he looks very similar to the sullen baby with ear-protectors, though he has a shaved headed rather than natural baldness, headphones rather than ear-protectors and he is chewing on the inside of his cheek rather than on a tasty rusk. He has been raving since 1989. What’s he muttering? Move closer. It’s something about chem trails and how the government doesn’t want him to party. Nobody wants you to party, Blitzed Raver. And yet you do it anyway. That is why you’re such a legend.

The person who has lost their friends
You kindly responded to his small talk. Now he gravitates towards you whenever he sees you. You suspect he never had friends to begin with or that he has eaten them. “You’re my friend now,” he seems to say, clasping your arm. You can actually feel him sucking your soul. “Begone foul succubus,” you cry. But he thinks you’ve just given him a cool nickname and invites himself to your house for Christmas.

The ligger who remains in the VIP area
The ligger came straight from another event and can’t remember if this is an opening for a new John Rocha show or Van Morrison’s birthday party. He has heard rumours that outside the VIP area there is a foul, muddy landscape where the brutals listen to a barbaric din and worship a floating stone head (Grace Jones). Here in the gardens of Elysium, however, elegant beings drink the finest ambrosia from plastic cups and listen to the europop stylings of DJ Foxypants.

The wise bearded journalist with a notebook (see byline picture)
Read the considered prose he writes about the pop musical- combos of the age distributed in quaint olden-days news-pamphlet technology*. Indeed, over the course of the weekend you regularly rush off to the news-dispensary in your horse-and-trap so you can read every word aloud over the breakfast china, right after you finish playing with your hoop and stick, operating your spinning jenny and/or being burned as a witch.

The person who is just doing their job
The security people, the food-merchants, the cleaners, the guards – if they could speak, the stories they might tell. And do you know what they love? That’s right – intoxicated strangers flinging their arms around them and trying on their hats. 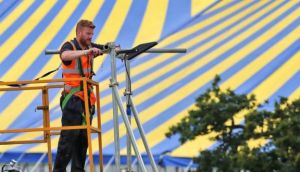