Exhibit B: An unnerving exploration of racism and brutality | GIAF review 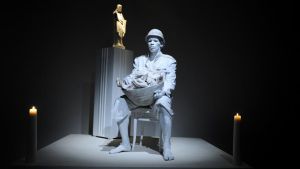 Who is watching whom in Exhibit B, the intensely provocative performance installation from South Africa’s Third World Bunfight? Audience members are summoned, one by one, in reverent silence, to move through a series of installations, as though through a museum or a shrine. But here the installations are a series of tableaux vivants, featuring black actors in fixed poses who recall both the brutality of European colonial history in Africa and the contemporary marginalisation of refugees. The performers meet our eyes and hold our gaze. It’s unnerving, imploring, maybe accusatory.

Director Brett Bailey has designed an experience that recalls, in both its structure and detail, the dehumanising and triumphalist displays of colonialism. One of the first installations we see, of a semi-naked woman painted obsidian black, revolving on a plinth, is entitled The Missing Link and accompanied with an inscription about Sarah Baartman, the 19th-century “Hottentot Venus” who was put on gawking display in both her life and death. The fetishisation of Baartman’s body is here invoked between the actor and audience.

Each installation carefully lists its materials, one of which is invariably “spectator(s)”. The underlying question seems to be: what do you think you’re looking at?

For some the answer will be an abhorrent and shameful history, vividly and unflinchingly exposed. Gruesome details of murders and mutilations are inscribed and evoked under the goading title Civilising the Natives; one woman is chained to the bed of a Belgian officer in the Congo, her eyes meeting yours through a mirror; and, in the production’s most uncanny moment, four Namibian voices rise in harmony from a line of disembodied heads, with a reference to the Nazi eugenicist Eugen Fischer. One of the political objections to Exhibit B, which has attracted protests and sometimes disruption in Europe, is that it transforms black suffering into an art object, freezing victimhood into a perpetual, upsetting display intended mainly for a white gaze.

It is something that Bailey and his cast have now come to address within the work itself. Where the juxtaposition of contemporary asylum seekers (described as “found objects”) among the historical “still life” once made connections between the “then” and “now” of racism explicit, now testimony from the actors includes responses to the controversy around the performance. Exhibit B, intended as a critique of racism, has now come to regard itself.

Here the modest introduction of a Galway-based asylum seeker, Siphathisiw “Blessings” Moyo, brings it all closer to home. In a country whose own colonial history is one of victimhood, Moyo’s inclusion is a necessary reminder of contemporary segregation among Ireland’s direct provision system for refugees. There is an urgency in making the sins of history manifest, an invitation to witness inhumane treatment that too many of us would prefer not to see.