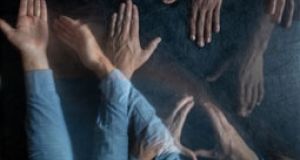 A Thousand Ways: A Phonecall is an intriguing response to the challenges faced by the theatre in recent months. Photograph: Maria Baranova

A Thousand Ways: A Phone Call
★★★★☆
Online until Sun, Sept 27th
“Words are not always enough, but it is what we have”, the strange mediator of A Thousand Ways: A Phone Call says, explaining the theatrical impetus of 600 Highwaymen’s experiment in theatrical connection over the telephone. Using the most basic of technologies – the old-fashioned phone call – Abigail Browde and Michael Silverstone invite audiences to engage with strangers in acts of intimacy that transcend their physical distance.

A Thousand Ways: A Phonecall is an experience for two strangers. It begins when both audience members dial in, by calling a local number and entering a code. A computer-generated voice begins the script, but most of the encounter is determined by the participating audience members. This is “a conversation not a love story”, the voice, which is gendered female, cautions us, “But somehow we will make something of it.” What that is depends on each audience members’ willingness to be honest, spontaneous, open to the exchange; “To make yourself visible” to the other person, using language alone as a tool.

Guided by our disembodied host, we are not left to flounder in silence, but prompted to describe our location, our position in our separate rooms, and to visualise a series of images, including each other. My partner is an American sitting in her kitchen in Kerry in front of a picture of stargazer lilies. I listen to her count her pulse and piece together the fragments of her life revealed.

With an idea of her firmly planted in my imagination, we take a journey into the American desert where the three of us convene under the stars. This forced narrative is perhaps the least successful element of the show, relying as it does on a specific cultural lexicon that not all audiences will share. (The beauty of this type of work is that it is transnational.)

A Thousand Ways: A Phonecall is part of a trilogy of works based on a dissonance between physical distance and emotional openness, and it is an intriguing response to the challenges faced by the theatre in recent months. The second part, An Encounter, which invites two different strangers to connect in person, was due to run in parallel with this production as part of Dublin Theatre Festival, but was cancelled along with the Festival’s other in-person events. However, even as an idea, a future potential, it provides an expressive gesture of hope.