Before You Say Anything review: riveting moments tease out how we feel safe 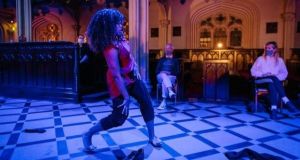 Before You Say Anything, Photograph: Simon Lazewksi

Before You Say Anything

Chapel Royal, Dublin Castle
★★★★☆
With live performances rare and careful right now, there’s a sense of ritual and sacredness to the experience; the slow entry and movement, the sanitising, the deliberate placing. This is even more pronounced in a theatre performance in the deconsecrated Gothic Revival chapel at Dublin Castle. The themes, too – safety, exposure, policing, public order – are tailored both to the setting and to the times we’re in.

Theatre collective Malaprop and writer Dylan Coburn Gray’s work, devised for the space, has three separate acts, all set in a church, with well-judged performances by Peter Corboy, Maeve O’Mahony and Ghaliah Conroy in multiple roles, and incorporating moments of dance and song/chant, including a repeated refrain-commentary “In my head there’s a universe….. “.

Each of the acts or stories are variations on a theme, involving someone fleeing, naked and exposed, seeking safety, sanctuary, solace. Along the way it touches on prostitution and concepts of public order.

A flamboyant “deviant” man in the 1880s recounts pleasures, which become persecution, exposure and threat; a woman fleeing her husband’s violence runs naked into a 1980s London church, finding sanctuary of sorts with a gay priest, whose assumptions she challenges; at the funeral of a vulnerable teenager who took her life after photos of her naked distress were circulated publicly, her sister confronts gardaí on betrayal at a time of need.

These riveting moments, slices of story, tease out how we feel safe, and both the vulnerability and the intimate core exposed when shorn of covering or protection. Moments of nakedness are fleeting but powerful. The performances are direct and intimate, while physically distant.

Thoughtful and skilfully executed, directed by Claire O’Reilly and designed by Molly O’Cathain, with Coburn Gray’s evocative language, this is subtle and timely, beautifully paced: brief interludes of gripping story, like riffs on a theme, as part of an overall meditation.

Runs as part of the Dublin Fringe Festival until Friday, September 11th.