Dublin Fringe reviews: RIOT is the festival's most exhilarating spectacle

RIOT - Can a great night out also count as a political act? 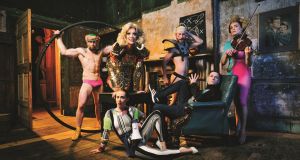 Meticulously composed cabaret: RIOT, at the Spiegeltent until September 25th

RIOT ★★★★
Spiegeltent, Dublin
Can a great night out also count as a political act? That’s the idea behind THISISPOPBABY’s sensational carnival, easily the most exhilarating spectacle on the Fringe, which folds social consciousness into entertainments both flashy and trashy. Emerald-cowled figures sing Irish airs, just as Emmet Kirwan delivers a blistering spoken-word buzz on the state of the nation and imagination. Driven by rebellious passion, Kirwan’s flow is dazzling (when he rhymes, you don’t draw breath), supplying both the wattage and conscience to Phillip McMahon and Jenny Jennings’s meticulously composed cabaret.

It would be sacrilege to say Panti, our MC, plays second fiddle; but slowed by an orthopaedic cast, it turns out she can put a foot wrong. Elsewhere, acts weave and clash as rivetingly as Alma Kelliher’s live music: Ronan Brady’s suggestive acrobatics over a Michael Harding monologue (it works!), Lords of Strut’s giddying contortions, the dopamine rush of the Up & Over It duo’s dancing. You rebel against any whiff of fakery, though, and despite its intentions, RIOT’s mantra treats Uprising like a feel-good consumer product. Otherwise, it’s an indulgence: You can have your revolution and eat it.
Until Sept 25
Peter Crawley

Into the Water ★★★★
Smock Alley
Dance duo Suzanne Cleary and Peter Harding may have surpassed 10 million hits for their online videos, but Into the Water is a wondrously timeless and dusty hour-long creation that is antithetic to three-minute digital distraction. They evoke an analog world that is entirely Newtonian: every event has an obvious cause-and-effect. Pre-digital Gen X classics are scattered around the stage, like a View-Master, Space Hopper and television with rabbit’s ears. Along with other manual contraptions these serve as signifiers of simple discoveries within a tactile environment buzzing with potential drama. This is expressed most viscerally through the dancers’ tap and body percussion. Simple building-blocks of gestures soon grow into complex patterns of movement, and are always performed with aplomb and perfectly woven into the narrative. Inventive construction, clear pacing and joyous performances means the show created for children never flags. It also provides a welcome disproval of our eight-second attention span.
Until Sept 24
Michael Seaver

Monday: Watch Out For The Right ★★★
National Boxing Stadium
Choreographer Cláudia Dias’s reconstruction of a boxing match asks searching questions about society, politics, and life, and wonders whether we should be asking better ones. This is a smart and searching piece, demanding concentration and reflection. It begins by referencing the Rumble in the Jungle, before aspects of the international financial crisis are cracked open. What is our role in these crises? Do we ignore the battle right before us, and listen instead to the voiceover, much as a boxing match between a man and a woman plays out in front of us, as a voice articulates snippets of our conscience? Or do we fight? There are some issues with sight lines around the ring-cum-stage, with screens projecting English subtitles (the performance is in Portuguese) sometimes a little tricky to catch depending on where you’re sitting. Unfortunately, the subtitles aren’t just a technical issue and pull concentration away from what is otherwise a compelling choreography of boxing and introspection.
Until Sept 20
Una Mullally

Rusangano Family ★★★★
Spiegeltent @ Merrion Square
On a Sunday night when people in Dublin and Mayo GAA jerseys swarm the capital in the aftermath of one quintessentially Irish event, another Ireland is celebrated – and scrutinised – in exhilarating fashion by Limerick-based hip-hop act Rusangano Family. Hailing from Zimbabwe, Togo and Co Clare – none of them hip-hop strongholds, to paraphrase Mícheál Ó Muircheartaigh – rappers God Knows and MuRli and DJ MynameisjOhn explore questions of identity and immigration, race and place with a combination of dizzying rhymes and genre-crossing beats. There are elements of theatre too, when the two rappers portray the mutual misunderstanding between father and son, or during guest MC Denise Chaila’s unadorned riff on misogyny. If this sounds rather worthy, God Knows and MuRli are utterly electrifying stage presences who keep the crowd moving even as their witty and observant raps switch tempo and mood. Taking their name from a Zimbabwean word for “togetherness”, Rusangano Family provide an astonishing vision of a new Ireland. Just as importantly, they know how to rock the party.
(One show only)
Mick Heaney

Hostel 16 3 Stars
Smock Alley Theatre
“What is this word? Dejected?” asks Karen, a schoolgirl living in Hostel 16, the ‘temporary’ accommodation where she has been living for the past five years with her family. “Depressed”, she answers without emotion, when she finds the word in her English-language dictionary.

Either word would suffice to describe the lives of the 10 other refugees we meet in Hostel 16, a play by Fionnuala Gygax, fueled by interviews with refugees living within the Direct Provision system. The irony of an entirely white, Irish production team and cast is particularly unsettling, but never quite resolved.

Performed on a set marked out like a prison cell, Gygax is interested in presenting the stark realities of the Direct Provision system: the curfews, lack of privacy, potential for abuse. Under Raymond Keane’s direction the presentation is brutally didactic rather than emotionally engaging: a stir to action rather than feeling, then. “It’s important people know we exist,” says one of the characters, Neasa. And maybe that’s enough.
Run concluded
Sara Keating

The Alison Spittle Show 4 stars
Project Arts Centre
I have no idea how much of what we see on stage is a persona, but, whether character or citizen, this Alison Spittle comes across as a kind of genius. Wild of hair, dressed in layers, the Westmeath woman disguises rare roundhouses with an apparently effortless charm. In conversation with American podcast host Erin McGathy, she makes an audacious segue from Gerry Adams to Matthew Broderick that fairly takes the breath away. Such is her amiable chumminess that you have trouble believing she’s said what she’s just said.

Staged as a chat show (later to be released as a podcast), the current, slightly overlong entertainment comprises two interviews interspersed with stand-up guests and songs from a house band. The opening chat with McGathy is quite wonderful: meandering, naughty, singular. The later conversation with comedian Karl Spain suffers from being a little too like something from a conventional chat show. Spain is generous and funny, but we don’t get nearly enough of the star. Sumptuous madness, nonetheless.
Run concluded
Donald Clarke

- The Tiger Fringe festival in Dublin runs until September 25th. See fringefest.com. Reviews continue daily through the festival at irishtimes.com/culture