Belfast’s Peace Walls, like shibboleths, are designed to keep people separated. But Stacey Gregg’s restless new play constructs them as an inhibiting prison 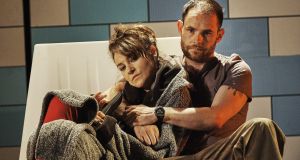 Can there be such a thing as peace without reconciliation? That is the logic behind Belfast’s so-called Peace Walls, which have grown in staggering numbers since the peace process. “It’s a big 12-foot-high wall between Themens and Usens, to keep the peace,” an indifferent construction worker, Alan (Andy Kellegher), explains to his young son. There is an acrid wit in Stacey Gregg’s new play, centred around the extension of such a wall, that “Themens” and “Usens” are never explicitly named, as though belief in division itself had eclipsed actual identity.

Perhaps that’s why the wall in Gregg’s play has its own voice, supplied by the versatile singer Cara Robinson, as insatiable and insistent as the plant in Little Shop of Horrors: “Build me.” In Paul Keogan’s design, the wall is assembled by five brickies steadily lowering descending coloured blocks, as though engaged in a manual game of Tetris. Bright and unreal, that is also the tone of Gregg’s comedy and director Hamish Pirie’s frenetic production.

Alan, who is most ambivalent about the worth of another wall, frets about his wife Ruby’s (Kerri Quinn) intention to place their son in an integrated school. The production’s ethos, though, is almost chaotically integrationist: everything is welcome. An electronic display flashes information about barriers throughout the world, from Berlin to Kashmir, in side-commentary. A conversation between Piotr Bauman’s stoic Polish builder and his ambitious daughter Agnieszka (Sophie Harkness) takes place partly in Polish. On site, the workers’ conversations slip frequently into a poetic unified consciousness, or a mantra of groupthink. And almost every scene is divided by one of James Fortune’s genre-hopping musical interludes.

It doesn’t all work: some adventurous sequences are needlessly extended, while striking devices, such as a symbolically realised smoke break, are later discarded for the real thing. But a restless, playful approach that resists coherent identity seems to be the point here, perhaps even the antidote. Through Louise Matthew’s cynical councillor, the play adumbrates the economic exploitation of Peace Walls, but in one giddily self-aware moment, it responds to a big political question with a comical shrug. It’s not that kind of play.

Still, Gregg has a point to make. Walls, like shibboleths, are intended to keep people separated, but they become something more imprisoning. Rhys Dunlop’s enjoyably self-preening Corey and Conor MacNeil’s gormless Mo are young inarticulate males struggling against a dim sense of history and insufficient opportunities in a brash new Belfast, as alert to received prejudice or open-mindedness from the older builders. “The wall runs through people’s heads,” says one character, and this one becomes all consuming.

The youthful perspective of the play, a refreshingly anarchic addition to drama about Northern Ireland, anticipates a time when such barriers have lost all meaning, but they cast a shadow for as long as they stand.

Maggie O’Farrell : ‘I wanted to give this boy, overlooked by history, a voice’
9 Miracle warnings and a lack of bull
10