Death at Intervals review: A wealth of talent wasted on a facile idea 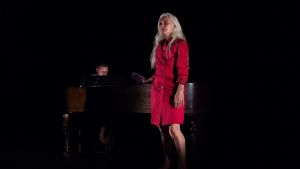 Death often wears a face in theatre and almost always comes with a task. He is God’s emissary, summoning Everyman to give a final account of his life; a practised debater in Death and the Ploughman, defending his actions; or someone in need of a holiday in the widely adapted La Morte in Vacanza. Now, in Kellie Hughes’s sepulchral stage adaptation of José Saramago’s magic realist novel, death is something quite ethereal: descending a black staircase in a red coat, with cascading hair as white as sea foam, and a fascinated expression. Death takes the striking form of Olwen Fouéré.

The object of her fascination is a musician of modest nature and mild ability, with no other distinguishing characteristics; less Everyman than Nobody. Played with a quiet, contained charm by Raymond Scannell, he sits at a grand piano that has been hollowed out to faintly suggest a coffin, playing sombre cadences with occasional flourishes. Like everything within Alma Keliher’s sound design, both music and voice here come amplified – Scannell, a gifted musician, is playing live, but you wouldn’t know it – and the effect makes action and consequence seem oddly divorced.

This may correspond with the narrative, which finds mortality on the fritz when death takes a holiday. In a nameless country, where everyone speaks as though through stolid translation, no one has died since the start of the year, and eternal life is taking its toll. In the story’s one intriguing idea, related by Fouéré like a calm parable, people begin smuggling their dead over the border where finality is still functional, like refugees from life.

Hughes concentrates instead on an extended duet between two nonentities: the personification of death, to which Fouéré lends her gravity and physical precision; and the barely sketched musician, to which Scannell lends his fingers.

Under Hughes’s direction, they approach each other with the warmth and passion of two glaciers. He is “troubled” by her, but “not afraid”. “Prudence only delays the inevitable,” she responds. Half an hour later, they’re still at it, laboriously wondering on the phone which of them is the cat and the mouse in this game.

Some will find it amusing to see death portrayed in this way, as an adolescent crush, the musician anxiously wondering why she hasn’t called. But a production that treats death as merely a narcissistic threat to the individual, or worse, a force that is stunned into marvelling submission by the glory of art, is confoundingly solipsistic. Is this woman life, wonders the oblivious musician at one point. “No, I’m much more complicated than that,” she responds. Sadly, with a wealth of talent addressed to a facile idea, this production doesn’t take her at her word.