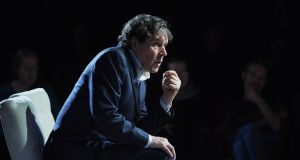 “The last thing I am is Irish,” insists Eric Miller, a sullen Belfast loyalist, in David Ireland’s caustically funny new play. Wary and fidgety, he keeps his chin down and his eyes up when talking, even as his psychiatrist assures him that this is a safe place where anything can be said without judgment.

Both Eric and David Ireland seem keen to test those limits in this co-production between the Abbey and the Royal Court, lobbing unpalatable opinions, outrageous claims or racist epithets. For Eric believes that nowhere is safe, and the threats to his identity amassing. One such danger, fiendish and extraordinary, has brought him here: he believes his five-week old granddaughter is Gerry Adams.

If that makes Eric sound like another stooge in an overblown Northern Irish satire, Stephen Rea’s masterfully melancholy performance suggests something else, a man who is as alarmed as he is quietly convinced. Part political, part psychological, it makes Ireland’s conceit more grounded and somehow funnier. As Eric’s domestic scenes materialise in the psychiatrist’s office, a beige space that divides the audience into opposing sides, his paranoia is at once farcical and disturbing. Discovered mid-interrogation by his daughter (Amy Molloy) and wife (Julia Deardon) – both fretful and admonishing characters, but otherwise barely drawn – Eric and his delusions are the centre of the play, summoning up Gerry Adams by way of miniature glasses and a magic marker. “This situation is potentially explosive,” says Eric. How far is he willing to go?

The provocation of Ireland’s play is to make Eric’s identity crisis stand for the predicament of loyalism, a culture defined through rigid opposition. (In conversation with his shrink, a dutiful Wunmi Mosaku, Eric sees “Fenians” everywhere, the way Howard Hughes once saw germs.) The challenge of the production, though, is to bring the audience into his mind-set.

In Rea’s delivery, a comic reminiscence of being mistaken for Irish in London becomes quite touching, but a prolonged encounter with an imagined loyalist paramilitary (“An angel of the UVF” played with enjoyably jittery menace by Chris Corrigan) suffers from overwriting, the pace sagging under rococo flourishes of bigotry and absurdist palaver.

These are cues here, and in various speeches that distend reality, that the production might have been bolder in staging Eric’s delusion (in one frame-bending sequence, Rea addresses us, his hallucination and his therapist at once). But director Vicky Featherstone prefers the anchor of realism, politely signifying the consequences of pathological delusion by tracking stains into the carpet of Lizzie Clachan’s set.

That make it harder for the performance to scale the peaks of devastation, when once-ludicrous fears become genuinely explosive. Ireland’s play slyly makes the case that it is not discrimination that ensures survival, as Eric believes, but rather the ability to be two opposing things at once: Irish and British, politician and terrorist, even comedy and tragedy. If tragicomedy is the natural Irish form, Ireland makes his own inversion here, beginning with amused splutters, ending in hard gulps.

Hannah Gadsby: Douglas – Even her detractors will have to admit this is funny
9