Culture Shock: Stephen Rea on his belief in the cleansing power of theatre 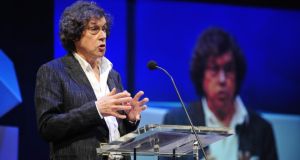 Stephen Rea was the recipient of this year’s Special Tribute Award at The Irish Times Irish Theatre Awards. The award is giving each year to someone who has built up an outstanding body of work and is a vibrant presence within Irish theatre. The winner is chosen by the writers, editors and organisers of the awards.

Rea was chosen this year in recognition of his continued commitment to the artform, for his work with the Field Day theatre company, and for his recent roles, particularly in Ballyturk, directed and written by Enda Walsh.

I have been exceptionally lucky to have first dig at some of the greatest plays to come out of this country.

Plays by Tom Kilroy, Frank McGuinness, Sebastian Barry and also, of course, Brian Friel, Stewart Parker, Tom Murphy. And, most recently, Ballyturk by Enda Walsh, which was a total blast.

The Abbey Theatre gave me my first job and, thanks to FJ McCormack, Barry Fitzgerald and Cyril Cusack, I was allowed to be included in the great tradition of Abbey acting.

Then there are the great playwrights I’ve worked with in England: Trevor Griffiths, Christopher Hampton, Harold Pinter.

These are plays that change you as an actor and change your life.

Field Day recently toured to New York, as Irish companies now frequently do. This is not just because of our brilliance and professionalism; it is because a vacuum exists in American theatre, which we are able to fill.

And we’re able to fill it because we have Arts Councils, whose funding allows us time to experiment and develop new work. We need to protect our Arts Councils from proposed government cuts.

I suppose my time in the theatre has been driven by belief. I say belief, singular, not beliefs, plural. I think that anyone seriously involved in the idea of theatre as an important form of public discourse needs to have a belief in its cleansing power.

In such conditions, it is almost impossible to see the truth.

I would say that it is only in the arts, and primarily in theatre, that there is any possibility of a recovery from the condition in which we now live. Where everything is judged by its commercial allure, by its laxative smoothness, by its glossy sheen of sci-fi, high-tech, racist sectarianism that animates our neo-liberal world.

It is in that world that theatre has to fight for survival, aware that it too has been absorbed, it too has become a commodity like any other.

“Artworks have assumed the same character as artefacts in general, namely they have become commercial commodities . . . Only those arts which make a contribution to saving mankind will survive. Culture must lose the character of a commodity in order to become culture again.”

I had the great good fortune to work with Brian Friel on his immense play Translations. Into a violent world, where language was blocked and debased, we introduced a play which offered a different, ambiguous language. We offered questions instead of statements.

Other great writers took up this challenge. Thomas Kilroy, Derek Mahon, Stewart Parker, and most recently Sam Shepard. And of course Seamus Heaney, who in The Cure at Troy said:

They torture one another,

They get hurt and get hard.

No poem or play or song

Can fully right a wrong

No. But a play can offer a language, which helps in identifying a wrong, allowing people to redefine their responses to it.

It would be hard to select a group of such diverse talents that, in their several ways knew how hard it was to redeem language from the ready made confections of history and historical writing that aligned fact with propaganda.

Like the Australian Aborigines, these writers dream the future and lead us towards it.

For that we are eternally in their debt.

Michael Kiwanuka: ‘If you’re a creative, you don’t try and be that, you just are’
7

Hands off the Toy Show: Why the Grinch can’t steal our Late Late Christmas
9