Culture Shock: Nothing is funnier than unhappiness, which is why we’re drawn to Russian drama

Brian Friel plays up the farce in his version of Turgenev’s ‘A Month in the Country’, but Ethan McSweeny’s production at the Gate Theatre in Dublin seems reluctant to go all the way 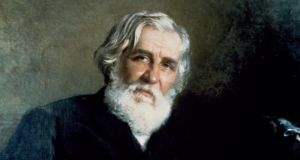 Ivan Turgenev: the playwright fashioned a “theatre of moods, of secret turmoil rather than explicit action”, as has his adapter Brian Friel. Portrait by Mokouski/Getty

It is almost taken for granted that there is some kind of special dramatic relationship between the two edges of Europe, Ireland and Russia. Of the major figures of modern drama (those, that is, who are not themselves Irish), neither Henrik Ibsen nor Bertolt Brecht has a very deep presence in Irish theatre. But Anton Chekhov is everywhere. To take just living Irish playwrights, Tom Murphy (The Cherry Orchard), Frank McGuinness (Three Sisters), Thomas Kilroy (The Seagull) and Brian Friel (Three Sisters, Uncle Vanya, The Bear, The Yalta Game) have all paid the ultimate homage of direct adaptations. Friel has gone even further, engaging with the writer who in turn did so much to open the way for Chekhov, by adapting Ivan Turgenev’s novel Fathers and Sons in 1987 and then his play A Month in the Country in 1992. The Gate is currently revisiting this last adaptation.

What’s the attraction? One could say of course that every playwright has to deal with Chekhov at some level, but Friel’s many versions (including his original 2002 drama, Afterplay, which revisited characters from Three Sisters and Uncle Vanya) and his parallel explorations of Turgenev suggest that in his case the level is a very deep one. In part it may be that Chekhov and Turgenev’s wonderfully strong female characters were especially intriguing at a time when Irish drama was very male: it does not seem accidental that Friel’s version of A Month in the Country belongs to the same period of his writing as his most womanly plays, Dancing at Lughnasa and Molly Sweeney. In part, too, it may have something to do with social class: the Russian land-owning gentry could both stand for and set at a distance the more complicated Irish ascendancy.

But mostly it’s to do with something less tangible: the idea of mood. In a programme note for the original production of A Month in the Country at the Gate in 1992, Friel put his finger on the source of the attraction to Turgenev and his follower Chekhov: “Turgenev fashioned a new kind of dramatic situation and a new kind of dramatic character where for the first time psychological and poetic elements created a theatre of moods where the action resides in internal emotion and secret turmoil and not in external events.” A theatre of moods, of secret turmoil rather than explicit action, is what Friel himself has pursued.

In essence A Month in the Country is a study of a very moody woman. The imperiously capricious Natalya Petrovna, mistress of a large estate in a still feudal Russia, is one of the great roles for a no-longer-quite-young woman: part Phaedra, part Hedda Gabler, part ditzy blonde. Leading actors have played her. She was, in Turgenev’s time, a shocking figure: when the play was first published, in 1856, the Russian censor insisted that her husband be excised. Only much later was Natalya restored to her disturbing self: a married woman who has one unrequited lover (Rakitin) and who herself then falls for the young student Aleksey.

Friel’s most telling intervention in Turgenev’s text is to radically alter Natalya’s age. Turgenev has her at 29, just eight years older than the student she falls in love with. Friel makes her 46, more than twice Aleksey’s age. This is a high-stakes gambit, for it makes her emotional flightiness, her almost adolescent shifts from cold calculation to helpless desire, from the cruel manipulation of the men around her to her sense of herself as a powerless victim of love, all the more extreme. And it raises questions that Ethan McSweeny’s elegant but excessively cautious production currently at the Gate can’t quite answer. Is the tone farcical or tragic? Are we to empathise with Natalya’s suffering or smile ruefully at her ridiculous self-dramatisations? Is she a Phaedra, the tragic victim of a sadistic Eros, or just a bored housewife playing with men?

Oddly enough, these questions are not really for Aislín McGuckin, who brings to Natalya the swiftness and mobility of an Irish sky on a windy summer’s day. She is entirely convincing in her creation of a visible, embodied emptiness, a woman who is all commanding energy and no direction. But for the play to keep its grip we have to have a sense of how to place her. The production can’t afford to be as uncertain in its moods as she is. But here Natalya’s lack of definition seems to seep outwards, into the play as a whole.

To me, at least, it seems that A Month in the Country should be much funnier than it is here. Its dramatic mechanisms, after all, are pure farce: trysts interrupted, intimacies overheard, frantic exits and entrances. Friel plays up these elements, but McSweeny seems reluctant to go all the way with them, as if he fears too much laughter would dilute the play’s essential sadness. But what Irish playwrights took from the Russians, after all, was the realisation that, as Nell puts it in Samuel Beckett’s Endgame, “Nothing is funnier than unhappiness.” The most serious thing about life is that so much of it turns out to be a farce.