Beyond the Abbey: the trouble for women in theatre 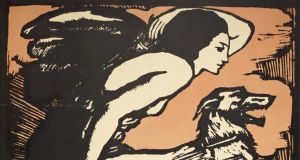 Where are the women?: Queen Maeve in the woodcut that WB Yeats commissioned from Elinor Monsell for what became the Abbey Theatre. Photograph courtesy of the National Library of Ireland 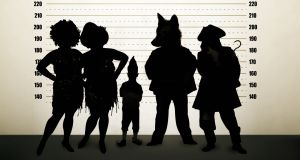 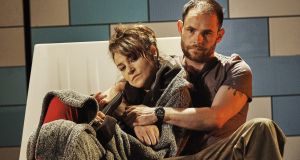 Commissioned by the Abbey: Andy Kellegher and Kerri Quinn in Shibboleth, by Stacey Gregg

In the foyer of the Abbey Theatre a small plaque commemorates the staff and company members who participated in the 1916 Rising. Of the seven names, three are women: the actors Helena Molony and Máire Nic Shiubhlaigh and the usher Ellen Bushell.

The slick promotional video for Waking the Nation, the Abbey’s 2016 programme, quotes Molony on her involvement in the Rising. “We thought we were going to be part of this big thing to free our country,” she wrote. “It was like a religion. Personal feelings and vanities, wealth, comfort, position: these things did not matter.”

Molony was a radical feminist and nationalist, and was critical of the way the 1916 ideals of equality were undermined by the patriarchy of the Irish Free State. She spent the rest of her life campaigning to improve the status of women.

In an interview with RTÉ recorded just before her death, in 1967, Molony spoke about the shared root of her attraction to nationalism and feminism as one of equality, “the abolition of the domination of nation over nation, class over class, and sex over sex”. Molony would likely be disillusioned by how her words are being used to prop up the programme for Waking the Nation, which privileges the patriarchal narrative of Irish history.

The events of 1916 will be addressed directly by a staging of Seán O’Casey’s 1916 play The Plough and the Stars and a staged reading of Of This Brave Time, based on oral histories by Jimmy Murphy. Frank McGuinness’s Observe the Sons of Ulster Marching Towards the Somme will provide an alternative prism for reflecting on similar themes. Complementing this are productions of work by Shakespeare, Tom Murphy and three new plays by three men.

The full production schedule, from January to September, credits 18 men and just two women in the line-up of writers and directors. The disparity has caused considerable controversy, as it reflects the continuing neglect of women’s key role in Irish history. More importantly, perhaps, it highlights the difficulties that face women working in Irish theatre today.

It may seem unfair to use the Abbey’s poor record as a general reflection of the malecentric thrust of Irish theatre. The Gate Theatre Theatre, for example, has produced only 17 new plays by Irish women in its entire history. And under Aideen Howard, its former literary manager, the Abbey has in recent years made a concerted effort to nurture women writers.

These have included commissions such as The Fairer Sex, the unfortunately titled short-play programme in 2009, and the Abbey’s New Playwrights Programme which between 2009 and 2013 mentored 13 women out of a total of 24 writers. Indeed, a new play that it commissioned from Stacey Gregg, Shibboleth, has just finished a month-long run.

But the National Theatre is built on a foundation of inclusion, on offering a reflection of Irish society, and the privileging of the male voice in a programme that purports to interrogate the foundation of the nation is especially troubling. The total exclusion of minority voices is no less egregious, but that is a separate issue: women are not a minority.

In a brief exchange with detractors on Twitter last week, the Abbey’s director, Fiach Mac Conghail, outlined the reasons behind his programming. “I don’t and haven’t programmed plays on a gender basis,” he wrote. “I took decisions based on who I admired and wanted to work with. Sometimes plays we have commissioned by and about women just don’t work out. That has happened. Them the breaks.”

This implies that the Abbey failed to identify work from women that was worthy of producing in 2016. It ignores the entire canon of work produced by Irish women playwrights during the 20th century, including that of Lady Augusta Gregory – a founder, with WB Yeats, of the Irish National Theatre Society, which became the Abbey – the republican feminist Dorothy Macardle, the naturalist genius of Teresa Deevy, and the critical Northern voices of Anne Devlin, Christina Reid and Marie Jones. And it dismisses the work of contemporary writers such as Ursula Rani Sarma, Nancy Harris, Abbie Spallen and Stella Feehily.

Mac Conghail now acknowledges the error. “I made a mistake,” he says. “There is no way I can defend not having a new play by a woman in the programme. I knew there would be some criticism, but the reaction has made me question my own filters and the factors that influence my decisions.”

He says the Abbey “did look at plays by women from the canon, but my personal prejudice is in favour of contemporary writing: to do something new. I am proud of the programme regardless, and I hope that doesn’t get lost. Yes, I could have done things differently, and I regret the exclusions and omissions, but I think it is a strong programme.” Mac Conghail also says he has two new plays by women that he hopes to produce in 2016 if he can get the funding.

Irish women writers are enjoying success abroad. The work, for example, of the Abbey board member Deirdre Kinahan, who has never had a full-length play produced by the theatre, is enjoying a second, sold-out, on-demand run in Warsaw. Nancy Harris’s new show for children, Baddies: The Musical, has just opened at the Unicorn Theatre in London. Rani Sarma’s latest play has just been on across the city in Soho Theatre.

These writers are also addressing important social or national themes. Feehily’s last play, This May Hurt a Bit, about the NHS, was described, in a rave review by Michael Billington of the Guardian, as an “urgently topical . . . unapologetic piece of agit-prop”. Kinahan’s most recent theatrical outing, Spinning, tapped into the contemporary phenomenon of filicide.

Women in the Constitution

For many women working in theatre the Waking the Nation fiasco has enabled them to express a frustration that has simmered for years. As the director Sarah Jane Scaife says, the issue at the Abbey “is reflective of women’s sociohistorical placing within the Constitution itself. This sidelining of women within the family and the home needs to be addressed through our art and, of course, through a changing institutional and governmental culture.”

Added to this are pressing contemporary concerns, according to the dramaturge Tanya Dean. “The problem is the larger cultural factors that cripple access and support for female artists,” she says. “Female playwrights are subject to the same five Cs that Michelle O’Donnell-Keating” – a founder of Women for Election – “talks about as the key factors that hold women back in politics: culture, confidence, candidate selection, cash and care”, such as obligations of childcare or dependents. “If women aren’t empowered beyond these conditions to write plays, then the plays simply won’t be available for theatres to programme.

“How can we address these factors that may limit women’s capacity or confidence to write and to push for their plays to be produced? Is it the responsibility of the Arts Council, the support agencies, the theatres, the companies or us as an industry?”

People who work in theatre have mobilised in response to Waking the Nation and the wider problems of inequity that it has exposed. The producer Lian Bell has initiated a conversation on Twitter (#wakingthefeminists), and both men and women have been sharing experiences and ideas about how to support Irish women working in theatre.

International precedents might prove useful. Dozens of UK theatres have responded to individually tailored research presented to them by Tonic Theatre, a gender-equality organisation. Washington, DC, has just hosted the inaugural Women’s Voices Theater Festival, where 50 companies each premiered a work by one or more women playwrights (including The Magic Tree, by Ursula Rani Sarma).

For the moment, social media has enabled the quick formation of an online community (#fairplayforwomen) to highlight productions that feature the work of women artists.

Between the Abbey’s foundation, in 1904, and 2012, 14 per cent of the plays it staged were by women, according to Patrick Lonergan, professor of drama at NUI Galway. Despite initiatives over the past few decades, the overall representation of women writers at the theatre has fallen. Research by Dr Brenda Donohue has found that from 1995 to 2014 just 11 per cent of the plays staged by the National Theatre were written by women.

Are gender quotas a fair way to address the situation? Probably not, but there must be some formal way for the Abbey to redress the balance, by recovering a canon of works by women that has been long overlooked and fostering the talents of Irish women who are still writing for the stage. The commemoration of 1916 offers scope for looking to the future as well as to the past.