Being Behan: death by celebrity and alcohol

Adrian Dunbar, who takes the lead role in a play about the twilight of Brendan Behan’s life, thinks the time is right to resuscitate his legacy 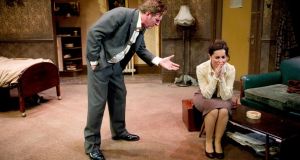 Adrian Dunbar and Pauline Hutton in the Lyric Theatre production of Brendan at the Chelsea. Photograph: Steffan Hill, hulton/getty 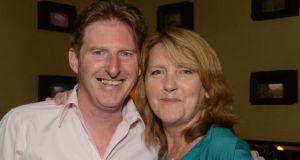 Adrian Dunbar with the playwright Janet Behan, niece of Brendan 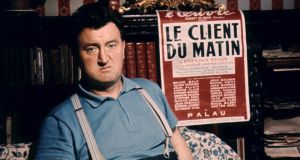 Behan reportedly turns to the other two and says: “The problem with Dublin these days is that there are just no characters.”

All irony aside, the image of these three men, huddled forlornly, locked out, strikes a chord with Dunbar. He believes writers like Behan were “terribly served” by 1950s Ireland. It might be hard to relate to in these more secular times, but Brendan Behan was shunned by many aspects of society, at least partly because of his excommunication from the Catholic Church.

“Behan, Kavanagh and O’Nolan – they were tortured souls,” says Dunbar. “They were the only dissenting voices in Ireland at the time, and they paid a very heavy price for it.”

As we approach the 50th anniversary of Behan’s death next year, Dunbar reckons the time has come to resuscitate his legacy – not so much the tourism-oriented mythology around the black stuff and blarney, but the literature itself.

“He’s extremely neglected as a writer,” says Dunbar. “He didn’t come through one of our big educational institutions, so there’s no one organisation to champion his cause. His plays are produced in every country around the world. There are Behan experts in international universities, but we seem to have forgotten him here in Ireland. He was an extraordinarily gifted writer. His poetry alone is outstanding. It’s time for some serious archival work on him.”

Dunbar is hoping that a new play, Brendan at the Chelsea, written by Brendan’s niece, Janet Behan, and directed by and starring Dunbar in the lead role, might be a first step towards a renewed appreciation.

The events, set in one room of the Hotel Chelsea in New York in 1963, take place at the end of Behan’s life as alcoholism and diabetes close in on him. He won’t live to see the birth of his first child, Blanaid, some months later.

It’s a no-holds-barred production that, while managing to avoid sentimentality or glorification, pulls all the skeletons out of the closet: drink, sex addiction, republicanism, infidelity, bisexuality.

After opening Belfast’s newly rebuilt Lyric Theatre a couple of years ago, the play has just returned from New York, where it was warmly received. The New York Times critic wrote that Dunbar’s performance alone “makes [the play] a must”.

Dunbar and Beckett
Dunbar is not new to championing Irish writers and has been an enthusiastic supporter of the fledgling Happy Days Samuel Beckett summer school in Dunbar’s home town of Enniskillen, Co Fermanagh. Last summer, Dunbar and his wife, Australian-born actress Anna Nygh, gave readings of Beckett’s work at dawn on Devenish Island on Lough Erne amid the mist and monastic ruins.

“It was very special,” he says. “These sorts of events you might only get a handful of people at, so it’s very different from being on stage. It’s intimate and moving.”

Dunbar has been similarly enthusiastic about Derry’s UK City of Culture tenure, and he directed two of Brian Friel’s plays, Translations and the lesser-known Performances, in the city.

In between, he’s been busy with his usual mix – playing Irish trad and jazz with his pop-up band, finishing the second series of BBC2 crime caper Line of Duty and trying to progress a film based on James Connolly. Would he like to play Connolly? “Oh no. I’m way too old for that role now.”

Perhaps playing Behan, who died at 41, has given Dunbar a sharpened sense of the fragility of life, especially in relation to fame and alcoholism.

Dunbar admits to having had a tricky relationship with alcohol himself. “It was starting to get in the way,” he says. “So I gave it up. People sometimes forget that alcohol is a chemical. It can change how you think. It was making me into a glass-half-empty person.

“With Brendan, it was more about enabling him to cope with fame and social situations. He was terribly shy and had a stammer, so a few drinks would relax him. That was fine when he was young and fit, but as he got older, it became his enemy. Sadly, it was an enemy that would defeat him.”

Brendan at the Chelsea runs at Project Arts Centre, Dublin, until Saturday. projectartscentre.ie


The playwright: Janet Behan on writing about her uncle
Janet Behan wanted to write about her famous uncle Brendan to “give two fingers to all the naysayers”.

She had her payback moment last month when her debut play, Brendan at the Chelsea, opened for a five-week run at Manhattan’s Acorn Theatre to high praise.

As well as being an endorsement of her writing – Janet Behan is a career-long actor across theatre, TV and musicals – the success of Brendan at the Chelsea has been important to her personally, for reasons bound up with her teenage days, when she would visit her Dublin cousins from her home in England.

On one of those occasions, her uncle Dominic took the children to O’Donoghue’s pub on Merrion Row, where they struck up conversation with other punters. When asked her name, Janet proudly announced that, despite her Sussex accent, she too was a Behan. That was when a stranger rounded on her. “It’s the likes of you f***ing Behans that give the hard-working Irish a bad name,” he snarled. The insult stuck with her for life. “There’s a lot of very difficult baggage that comes with having this surname,” she laughs ruefully. “Growing up, I found that confusing.”

Janet Behan was reared in Brighton. She never knew Brendan well, being only 10 when he died, but she remembers visits to his Ballsbridge home and the contrast between his wealth and her father’s poverty. “My father Brian and his siblings were such a talented bunch, yet there was such bitter rivalry between them,” she says.

Brendan at the Chelsea grew out of a commission to adapt the book, Brendan Behan’s New York, for the stage, but by the time she had finished, it was less an autobiography and more an impressionistic biopic.

“This is my take on Brendan,” explains Janet. “It’s not just about one individual. It’s about the effect of alcohol, the effect of celebrity.”

The Chelsea of the title is, of course, the Hotel Chelsea in Manhattan, which in the 1960s was a bolthole not only for Behan but also for Arthur Miller, Tennessee Williams and Charles Bukowski. It is also the hotel in which Nancy Spungen died; Sid Vicious was later charged with her murder.

The play embraces these seedier undertones, addressing not only Behan’s alcoholism but his unfaithfulness – including a homosexual liaison – to his wife, Beatrice.

“It’s an honest appraisal,” says Janet, “but it came from a place of deep respect. For years I had been afraid of reading any of Brendan’s work in case he was a fraud. When I finally plucked up the courage to read Borstal Boy, I was dazzled.”